The Latest Trailer for the Crimes of Grindelwald dropped yesterday and it's left me with a dozen questions and few answers. 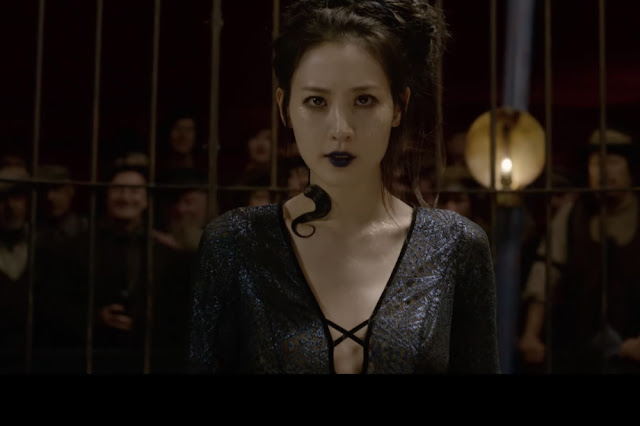 The latest (last?) trailer for the second Fantastic Beasts movie dropped on the internet yesterday. It had a big surprise in it that caught me off guard. The surprise is that Nagini, the snake that was Voldemort's final horcrux (and also his seemingly ever-present companion animal) was once a woman. Some people leapt all over this and asked Rowling if Nagini was an animagus. Rowling (of course) clarified it all on twitter with this: 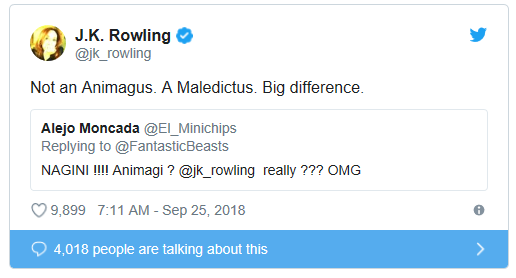 I had no idea what a "maledictus" was. It looked a lot like word (or letter) salad, but someone had to know. So this is what I found via my friend Sasha:

"A maledictus was a term used to denote a female individual whose blood had been cursed from birth, and eventually would lead her to turn into a beast. What manner of beast it might be was entirely dependent on the type of curse they had been afflicted with. The curse, which can be passed down from mother to daughter, can affect a whole family line."

J.K. Rowling also tweeted out that she had been sitting on this "secret" as to what or who Nagini actually was for some twenty years now, so it isn't a recent development and she knew about it before she started writing the very first book (probably). Maybe the idea formed shortly after, but in the end she'd sussed it out nonetheless.

So what does all this mean? It's interesting for sure. Here are just a few of the questions I have:

1) Why did we never see Nagini as a woman in the prior movies? One answer that came from friends that seems acceptable is that the curse had run its course by then and permanently transformed Nagini into a serpent. Fair enough.

2) Does that mean Voldemort and Nagini were in a relationship? Answer: It's obvious they had some kind of relationship. If it was romantic then that adds other implications like...

3) Did Nagini have children with Voldemort?

4) If they had children, then did they have babies who were maledictus as well?

5) Does Nagini then have the ability to cast spells and wield a wand? A little research from reading an article on Entertainment Weekly's website revealed that Nagini does not (in fact) possess a wand.

6) Did Newt Scamander collect Nagini? I found out (with a little research) that Nagini is a member of the traveling Circus Arcanus where she puts on a very convincing transformation act for muggles. So she's basically a side-show person. The actress that plays Nagini, Claudia Kim, said that Nagini wants to stay a human being and she can transform from human to snake at will. Yet due to the blood curse she knows she will eventually become a snake forever. Nagini is also friends with Credence Barebone, who ran off and joined the circus after wrecking havoc in Manhattan in the first movie (he also transforms into a thing).

7) Did Newt Scamander give Nagini to Voldemort? If so, why?

8) If it's a curse then, does that mean Nagini was cursed by an heir of Salazar Slytherin? Or..

9) Is Nagini the heir of Slytherin?

11) Could Voldemort be Nagini's son?

12) If it was an ancestor of James Potter and Voldemort fell in love with Nagini, then maybe Potter's ancestors were the instigators of all the racial hatred that boiled over in the timeline of Harry Potter himself. Which makes me ask: is the whole Harry Potter story then simply one of revenge? Is Voldemort a tragic anti-hero seeking revenge for turning his beloved into a snake and then having his own magic backfire on him?

I'm sure that some of these things will be answered with the upcoming film, but it doesn't stop me from asking questions.

Crimes of Grindelwald drops November 16.
Posted by Michael Offutt, Phantom Reader at 12:07 AM