All of the things you should know before you go and see Incredibles 2. 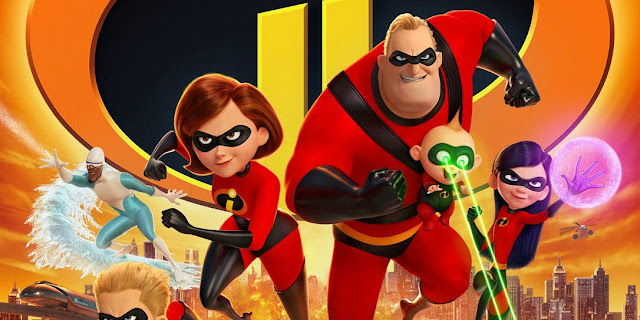 If you like Easter Eggs in movies, and you intend on watching Incredibles 2, you really should read this post :).

I saw Incredibles 2 this weekend, and I'm listing some things that you should pay attention to from the past so that you can get the most from this movie (if you haven't already seen it). Before you read this list though, it is a bit spoiler-y. However, I don't think it's too bad because it doesn't reveal anything about the plot of the film per se. Without further ado, here are the things that I noted:

1) In the 2005 short, Jack-Jack Attack, the babysitter has many activities that she tries with the baby that are supposed to be healthy and neurologically stimulating. One of these things is having the baby listen to Mozart. As a result, the child makes the babysitter earn her pay by destroying his own house. There's an event that pays homage to this short in Incredibles 2. Hint: "It's Mozart, Dahling."

2) A113. This innocuous seeming letter "A" grouped with the numbers "113" is a reference to the almamater of a bunch of Pixar artists who all went to class together in room A113. I believe it was at the California Institute of the Arts. I know Brad Bird is one of these alumni. Hint for spotting this one is the title of a movie made by Francis Ford Coppola.

3) John Ratzenberger, who played Cliff Clavin in Cheers, voices another character in this Pixar outing. He has voiced one character in every single Pixar film to date, so it's kind of fun to look for him. Hint: It's rather early in the film. Another one to watch out for is Bob Odenkirk who played Saul Goodman in Breaking Bad (if you're a fan). He plays a similar type character in this show, which seems like a stereotype unless you admit to yourself that he actually is really good at this kind of character. If the actor doesn't seem to care about being stereotyped, I see no reason to care either.

4) T.V. shows. At several moments in the movie, you see Johnny Quest and then The Outer Limits. These are two shows that I loved, and I looked it up to see if they were ever on the television at the same time. They were, and it happened in 1965. So that's when The Incredibles takes place: the year 1965. Just an F.Y.I. in case you were wondering at what point the movie is supposed to take place in American history.

5) Craig T. Nelson. He's the voice of Mr. Incredible, but his other role of note is playing the dad in Poltergeist (from the 80's). In that old movie, the family's youngest child is lured into another dimension and they can hear her pleading for help. Well, guess what one of Jack-Jack's powers is? Yup, it's a nod to Poltergeist.

6) Remember the Incredibile (Mr. Incredible's car from the opening action sequence of The Incredibles?) I will only say that James Bond would be proud.

7) There's a character named Evelyn Deavor. If you say it out loud really fast and pronounce the (EVE)"Ehv" part as "Eve" and still pronounce the "l" and the "yn" normally, it takes on a whole new meaning. That's all I'm going to say about that. Hint: It's a name like "Stuart Padasso." Shorten the "Stuart" to "Stew" and you're suddenly saying "Stupid asshole" if you say it really fast.

8) You'll want to stay through the credits because you get three songs (with vocals!) for characters featured in The Incredibles. They're done in the vein of the Spiderman song. You know the one: "Spiderman, Spiderman, does whatever a spider can/ Spins a web any size, catches thieves just like flies/ Look out, here come the Spiderman!"
Posted by Michael Offutt, Phantom Reader at 12:13 AM