The Cinderella live action movie that came out in 2015 is a true delight. If you haven't seen it yet you should watch it with your family.

I recently (and accidentally) watched the Cinderella live action remake that was in theaters in 2015. When it debuted, I missed it. Now I wish I had gone to see it in the theater because I really do think that it's magical. If you haven't bothered to look it up, you should do yourself a favor and watch it as soon as possible. It's wicked fun, and just a really good story. But here are some reasons that I fell in love with it.


1) The musical score is from composer Patrick Doyle, and it's incredibly lovely. It just kind of sweeps you along in the same kind of feel good tunes that you heard in the early Harry Potter films, and it lends the whole movie a kind of an old timey Bedknobs and Broomsticks kind of feel to it before embracing some truly epic and emotional crescendos. Just listen to this one tune from the soundtrack, and you'll see what I mean.

2) The costumes and set design are exquisite. When Cinderella shows up in a golden coach wearing the most incredible blue dress there ever was in order to attend the ball where the prince is waiting for her...well, it's magical. I know it's supposed to be, but I was captivated by it. The blue dress is fantastic and Helena Bonham Carter as the Fairy Godmother is the best choice ever for this kind of thing. A little "Bippity Boppity Boop" goes a long way.
3) The chemistry between the two leads is incredibly strong. Of course, I'm probably a little biased because I really like Richard Madden and would watch him in just about anything. But his portrayal of Prince Kit is super worthy of a Prince Charming if ever I saw one. OMG the blue eyes...just sayin'.

4) Cate Blanchett. I'd never seen her play evil until I saw her in Thor: Ragnarok. If I'd seen Cinderella in 2015, I'd have been better prepared to appreciate how evil she can be. She really nails the role of the wicked stepmother.

5) The details are so amazing. There are swan chandeliers. Yes...swan chandeliers. Just stop and go watch it. It's a feel good movie, and if you've been feeling down, it's just the kind of thing to pull you out of that funk and make you believe in magic once again. 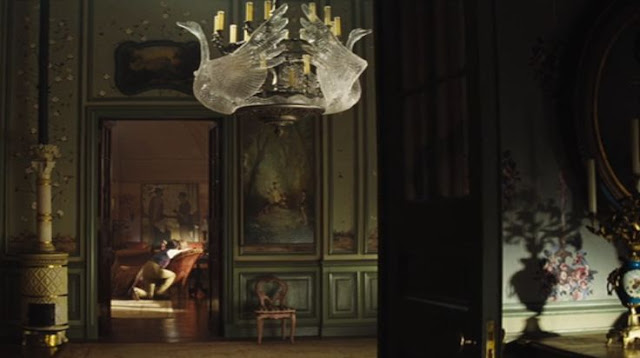 Email ThisBlogThis!Share to TwitterShare to FacebookShare to Pinterest
Labels: Cinderella 2015, Disney, The Cinderella live action movie that came out in 2015 is a true delight