The Soul Infinity Stone is not in Black Panther so where the hell is it? 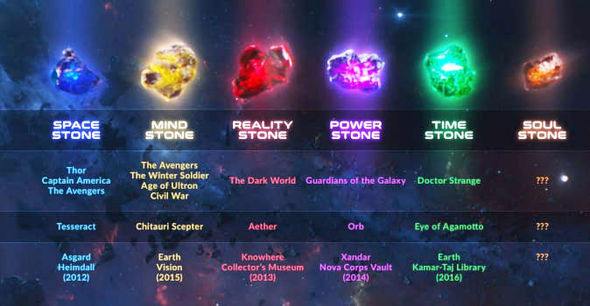 It's called the Soul Stone. It's colored orange in the comics, and it grants the user the ability to steal, control, and manipulate living and dead souls, plus it serves as a gateway to a pocket universe. At full power, you could use the soul stone to control all life in the universe. I thought we were going to see it in Black Panther, and I eagerly waited to catch a glimpse of it. But the family drama that played out on screen, although very good and highly entertaining, did not once show me the infinity stone. This is the last solo movie to be released before Avengers: Infinity War hits theaters later this year. So where the hell is the stone? How does Thanos find it?

Over the last decade or so, Marvel/Disney has bounced five of the stones around the movies. We know the space stone is in Loki's hand, and from the ending of Ragnarok we can almost surely guess it gets turned over to Thanos in short order. The other was entrusted to the Nova Corps at the end of the Guardians of the Galaxy first film so getting it from them should be short work for a titan the likes of Thanos. Then there's the reality stone, which was in the possession of the Collector. Again, it shouldn't be hard for Thanos to get his hands on that one either.

Maybe the heart-shaped herbs are formed in proximity of the soul stone? But if so, they certainly weren't orange. However, I probably shouldn't get so caught up on color. It's possible that the soul stone could have been trapped inside the vibranium meteor that crashed in Wakanda millions of yars ago, and it created the spiritual plane that T'challa goes to when having conversations with his father.

Or could the soul stone be in an entirely different place? Some people online think it could be in Heimdall's sword, which is why his sword could power the Bifrost Bridge.

It feels odd that the location of the stone hasn't been revealed. Leaving this task for a big reveal in Infinity War just makes me think that Infinity War might actually suck as a movie, because it already has a TON of stuff to fit into its allotted time.
Posted by Michael Offutt, Phantom Reader at 12:36 AM

Email ThisBlogThis!Share to TwitterShare to FacebookShare to Pinterest
Labels: soul infinity stone, The Infinity Gauntlet, The Soul Infinity Stone is not in Black Panther so where the hell is it