Gotham is a rolling dumpster fire of a show that its loyal audience needs to defend before I dismiss it as utter crap. I'll still watch it though. 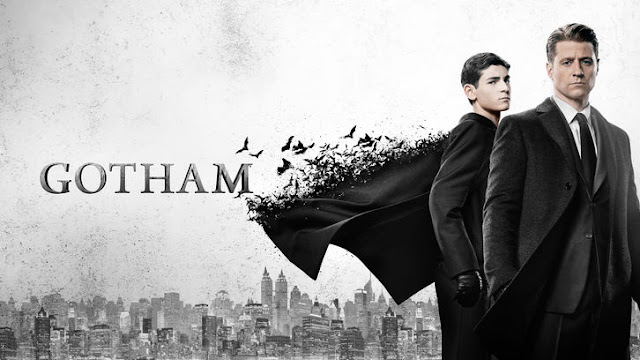 Apologizes to Andrew Leon, but I think Gotham is terrible. But I'm drawn to dumpster fires like a moth is to a flame, so I can't stop watching it. But that doesn't mean I think it's good. It's delightfully awful and by rights, shouldn't exist. But it does, so I want to talk about it.

The first season was pretty straight. But from season 2 onward it has embraced constant insanity. However, it's not boring! No it is not. And despite what everyone has ever said about it, Gotham is not a grounded crime drama. Stop spreading these lies people. In fact, I often wonder why anyone...any person...any citizen of Gotham would actually choose to live in Gotham City in the show (in the setting) that airs on Fox. That Gotham is completely bananas. Don't get me wrong, I'm not saying that this show has "jumped the shark." By all means, it doesn't count as jumping the shark if you strap on a jetpack and never ever land.

A few things that come to mind when I watch Gotham:

1) Fuk yo Batman timeline. Yep...I really feel this in my heart.

2) To hell with what you know about Jim Gordon. He's never sunk low enough. Maybe the reason people ignore Jim's faults is that he finds a way to fix a problem he created. Sure. For the "kill everyone" virus, his solution was to capture the Mad Hatter (whose blood is key to making the cure). Once pinned down, he cuts open Tetch's neck and fills a nearby mason jar with blood and runs away. It's a sixteen ounce jar, and he wants to be sure that he's got enough so he fills it to the brim. This is all heroic stuff, right?

Want another example? Jim Gordon literally sent a gang of murderous thugs to a crowded club opening to set a crime in motion solely to give himself a chance to look good at stopping crime.

Okay, I get it. I think. Jim Gordon is a great guy. A hero people should look up to. Uh-huh.

3) Violence. This show was never a "kid version" of Batman villains. It's one of the most violent shows airing on tv right now. But the violence is so over the top, that it gets a pass because no way could people even begin to imitate it in real life. People are (on a regular basis) mowed down by bullets, thrown off high places (gravity is a mass-murderer in Gotham), and having body parts popped out or chopped off. It is very creative in its gleeful embracement of murder.

4) Jim Gordon is seriously the worst. How does he get back to being a cop over and over again? How does a man with his record ever become commissioner? I don't get it.

Gotham has nothing at all to do with the Batman in the comics. Nothing.

Andrew, if you are reading this, it's time to defend why you think this show is the best superhero show on television. Seriously.

Email ThisBlogThis!Share to TwitterShare to FacebookShare to Pinterest
Labels: Gotham, Gotham is a rolling dumpster fire of a show that its loyal audience needs to defend before I dismiss it as utter crap, Jim Gordon