Annihilation is one of those films containing imagery whose sole intended purpose is to fool you. 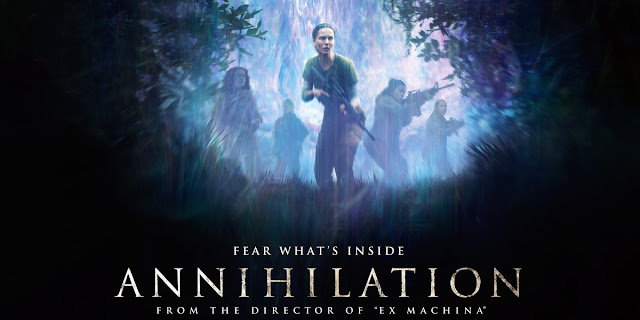 There are some spoilers in this post regarding Anniliation (the movie), but they are not "overt." Proceed at your own risk.

Annihilation is one of those films that has imagery in it whose sole intended purpose is to fool you. I have a love/hate relationships with these kinds of movies. On the one hand, I really love being able to identify things clearly. I love that some movies don't require a whole lot of thought processes to figure out exactly what I'm looking at. "That's obviously a fish" or "that's obviously a woman" etc. I think you may know what I mean if you've seen a lot of film. However, Annihilation is not one of these kinds of movies. It's a movie where you say, "Wait...was that a bear?" Or, "Wait...did that woman not have eyes a minute ago or was that just me?" "Was it a bad angle?" "What exactly am I looking at here?" "Are those things moving?" And the list goes on and on. It's aggravated further because you can't rewind a film for a second glimpse when it's being shown in a theater.

I did enjoy the film, but why can't we have good intellectual films where I'm absolutely certain that what I'm looking at is a thing? Maybe the reason is that in order to ask intellectual questions to begin with, we have to present something alien that we've never seen before, and then wait for our brains to catch up. In other words, you want to eschew the familiar. But, is this what good art does? Presenting the unfamiliar to our senses so that we have a chance to process and then name it so that it becomes familiar? After seeing Annihilation, I found myself thinking of the first time I saw the xenomorph from Ridley's Scott's Alien, and how I tried to figure out just what I was looking at. "Was that a head?" "Was that a tail or is that all one piece?" Of course, after staring at art illustrations and models and even holding a miniature one in my hand that was "for sale" in a Portland, Oregon comic book shop, I now have a pretty good idea of what the xenomorph is. So there is no more "surprise" factor, and seeing it on screen is actually kind of boring, which is the opposite of what one wants from an artistic point-of-view. So maybe Annihilation really succeeds in this instance, because there were many "WTF moments" that hit me during the viewing time of the film.

My criticism aside, Annihilation is a film that is full of smart stylistic choices. The wide lenses that the director used were obviously chosen to create an unnatural sense of space. Short focal lengths isolate characters in the frame. Even before the characters enter "the shimmer," which is a zone of ever-expanding weirdness slowly swallowing the Earth, the film is full of windows, screens, and lens flares to create dubious perspective. When the heroine and her husband are reunited during the early scenes, a drinking glass sits in front of the place where their hands meet in order to distort everything about their relationship in the land of curved light and strange reflections.

Ultimately, Annihilation was filled with technical brilliance, but because of all the trickery, I'm not sure of exactly anything of what I saw. Nor am I sure that any of it really matters. As a side note, this kind of bugs me, because I think that if a story is so weird that it defies any kind of understanding, it (maybe?) has pushed its audience too far. Or maybe I'm just picky and lazy because I want things to make sense.
Posted by Michael Offutt, Phantom Reader at 12:06 AM

Email ThisBlogThis!Share to TwitterShare to FacebookShare to Pinterest
Labels: Annihilation, Annihilation is one of those films containing imagery whose sole intended purpose is to fool you