I wonder why more die-hard Star Trekkers are unwilling to give Star Trek Discovery the time it needs to sew its storyline to the original series? 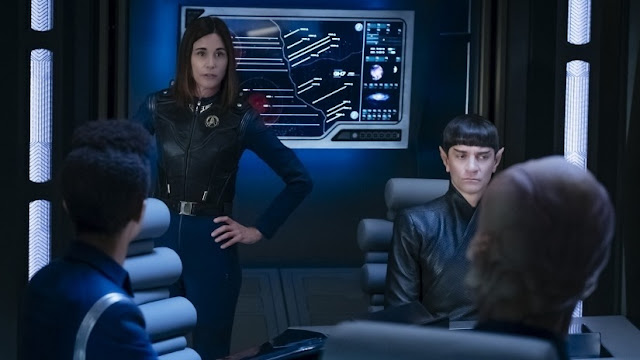 There are spoilers in this post for Star Trek: Discovery's first season.

I'm not sure why people have such trouble with Star Trek: Discovery. I absolutely love it. One such person, my friend Jake, said that he has a problem with all of the timeline disagreements. He doesn't understand how a series that starts ten years before the original series could feature such advanced technology (the spore drive) and no one has heard about it. He also doesn't understand why the Klingons look the way that they do in this series. He wanted them to look like Worf.

I tried to explain it to him, because everything has an explanation in the Star Trek universe. The reason we don't know how this story, how Michael Burnham's character was never mentioned by Spock or Sarek, or anything about the spore drive is because they haven't given the show time to explain it. Have a little faith. They got ten years to sew the threads of Discovery together with the original series. Jake replied that, unlike me, things need to make sense right away. This coming from a person who read The Wheel of Time series, which is (as far as I'm concerned) the biggest waster and offender of going nowhere that I've ever seen.

As for the other questions, they've kind of answered them. Why do the Klingons look different? Well it's one of dozens of tribes of Klingons. Undoubtedly, the ones that look like Worf are out there. The ones that this series is dealing with have a more primal and barbaric, hairless look. That's just the way it is.

Really, there's nothing that doesn't actually make sense in Discovery if you step back from it and consider it within the broader context of the canon. And the fact that it's about a black ops ship is amazing. The story they are giving us is so fresh, so exciting, and unlike anything I have ever seen in Trek before. As the first season draws to a close next week, here are the highlights that have captured my heart:

2) The action is non-stop. Every single episode is crammed full of special effects, incredible battles, and emotional acting. The main character, Michael Burnham, is not a captain. The captains always took center stage, so this is a departure from that cliché. And Michael Burnham is a great frickin character. Her emotional range is so powerful that Sonequa (the actress that plays Michael) continuously draws me into this spectacular role.

3) There is a gay character. I'm not too happy with the storyline of him losing his partner to a senseless murder, but I'm still happy that there is one in the series. Finally. I just hope he can get over the loss of his partner and find someone new.

4) They killed the main captain off. Seriously. Captain Lorca was revealed to be a mirror universe spy and traitor and they killed him off by hurling his body into a miniature spore-drive star that incinerated him. That's a great ending.

5) The captain of the Discovery is now an alien. An alien? Yes, you heard me right. When has that ever been a thing in Star Trek? For as long as I can remember, Federation starships that were part of a series have always been human. And it's a cool alien too, ala Doug Jones who played the fish monster in Shape of Water (nominated for a best picture academy award).

Star Trek: Discovery is a bold reinvention of what it means to watch Star Trek, and even though it may not be clear how it connects to the original series, I'm willing to give the creators faith that they can sew those two ends together.

I wonder why more people are unwilling to do the same. This series is really really good, and if you aren't watching it, then you are missing out. Sigh.

If you have theories, please put them in the comments.
Posted by Michael Offutt, Phantom Reader at 7:21 AM

Email ThisBlogThis!Share to TwitterShare to FacebookShare to Pinterest
Labels: I wonder why more die-hard Star Trekkers are unwilling to give Star Trek Discovery the time it needs to sew its storyline to the original series, Star Trek Discovery