Dark Matter on SyFy is actually a really good science fiction space opera that you should be watching. 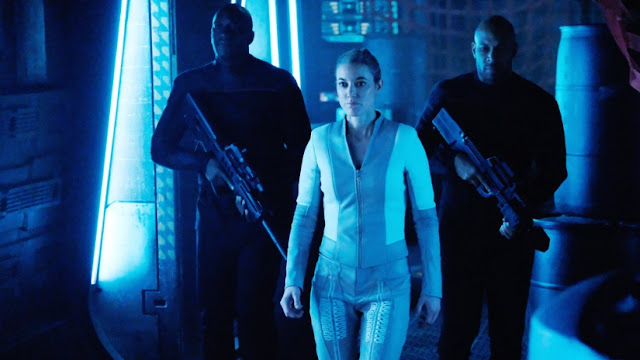 Dark Matter is actually a pretty good show. I've been a fan for some time now, but when I first watched, I admit that I was skeptical. How would six total strangers waking up with no memory of who they are even end up somewhere remotely fun? I guess my imagination just didn't see a future for it. It didn't see the "humanity in the future" potential that it currently is. So boy, was I wrong.

I love every episode that involves time travel, groundhog day, and being in the past. The Yoshida as emperor arc was really interesting. They've even got a character now that has lost her corporeal body and exists entirely within the matrix of the ship's computer database. Oh and "The Blink Drive" is really cool. And let's not forget that the crew of the Raza has duplicates now from another dimension. The list goes on and on for the wonderful things that the show's creators are bringing to SyFy on a regular basis. If I had to describe it to a roleplayer from the eighties and nineties, I'd say, "It's like 'Shadowrun' in space, but without magic."

If you haven't gotten into the show yet, most of the early episodes rotate around the afore-mentioned self-discovery theme, which can get kind of boring. The real magic started to happen when the show's characters learned about who they were, and then we get to watch as they like less and less of themselves or their ship mates (as a result).

Another thing that I continue to like about the show is that the Raza set looks amazing. And, it's not an "aliens of the week" kind of show that Star Trek oftentimes found itself in. Sure, there are a few stereotypes...the Asian swordmaster comes to mind. But the writing is really solid and the actors are some of the best I've seen in years. It kind of reminds me of the way I felt about Battlestar Galactica about a decade ago.

I think the whole first season is on Netflix, and if you are looking for a great show to watch I highly recommend that you set aside time and just binge. Also, this is not a "people in a bottle" series, which you can easily get confused into thinking that it is. Stick with it, and you shall be rewarded.
Posted by Michael Offutt, Phantom Reader at 9:33 AM

Email ThisBlogThis!Share to TwitterShare to FacebookShare to Pinterest
Labels: Dark Matter, Dark Matter on SyFy is actually a really good science fiction space opera that you should be watching