Maybe Mr. Robot's real message is to show how incredibly damaging mental illness can actually be on a society if not to outright question why society even exists in the first place 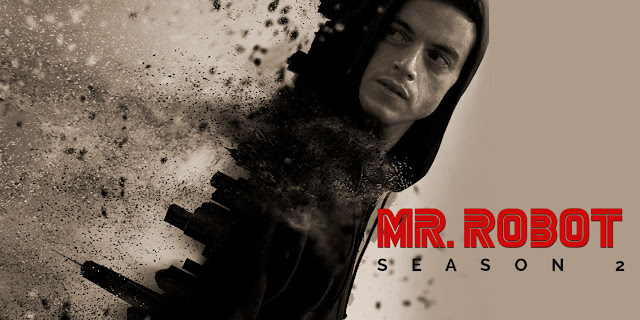 I'm a few episodes into season two of USA's hit, Mr. Robot. Although I'd classify it as "good" by placing it within the same vein as "A Beautiful Mind" or "Memento," these are both films that I don't revisit. Once was enough, because they're basically depressing shows. But on top of that, Mr. Robot adds another layer of "annoying" for me: the whole "unreliable narrator" schtick. Basically, we see the world of Mr. Robot through crazy person "Elliot" or through Tyrell Wellick's sociopathic wife (who knows what motivation she is up to). It makes me wonder if I (as a writer) would ever toy with the unreliable narrator trope, and I think it frustrates me so much that I compare it to "it's all a dream" sequences that are in books (but are only revealed as dreams after whole chapters). It's like pulling the "just kidding!" button and leaves the reader feeling like they've wasted time. Furthermore, it makes the reader question what is real, what isn't real, and why should I even care? So no, I don't think I'd ever use that.

I do think that Mr. Robot definitely has an audience out there. Disaffected people who are angry at the world and just narcissistic enough to lay no blame at their own feet for the choices they have made in life will love the show. People who express frustration, or who feel neutered and disrespected by life will flock to its themes of using computers to disrupt systems and bring pain to the rich elite whom they see as undeserving of the blessings within their life. In the latest episode, Elliot was praised for "hearing voices" and compared to the likes of Moses and Jesus. That's sure to stroke the ego of any narcissistic computer nerd out there whose life has been made a living hell through low self-esteem but likens himself as a social justice warrior (read "moral narcissist" into this phrase). The "no one appreciates that I'm a genius" mantra is a HUGE underlying current in Mr. Robot. Sigh.

So I'm what? Four episodes into this season. The big reveal last season was that Mr. Robot was in fact Elliot's dead father, and he wasn't real at all. I'm beginning to suspect that this season has even more big reveals. I think Elliot (for one) is in a mental institution. He keeps a journal, gets regular meds, there's only one phone he uses, and his only way to access a computer looks like it happens in an office in a prison or asylum (with a guard). He watches hoops from bleachers, and the show makes you think that it's probably a neighborhood park that he walks down to. But I suspect it's just in the yard where he's being kept prisoner. And I think he landed in there because he killed Tyrell Wellick in the season opener. But who knows, maybe I'm wrong. Tyrell might still be alive because we get hints through his sociopathic wife, but she doesn't give us much as far as that goes. The only thing that we really know about her is that she's into bondage, doesn't have enough hush money, and that she's dating a bartender because dating a loser (in her own words) is really appealing since she had all of the material things she could ever want and was never happy. But does the woman even know what happiness is?

The characters in this show are incredibly frustrating, evil, manipulative, and crazy. It's a good show, but it's not a "feel good" drama. Maybe it's only real purpose is to show how incredibly damaging some kinds of mental illness can actually be on society, if not questioning why society even exists in the first place. That, and maybe to compare hackers to gods. I'm sure Julian Assange would approve to being deified. Why not? The narcissism runs strong in the almost all male dominated tech community. But at least these narcissists seem to have good intentions: they want the world to be a better place. I guess we couldn't expect hackers to have read Virgil's Aeneid wherein the quote "The descent to hell is easy" appears and probably morphed into the phrase "The road to Hell is paved with good intentions."
Posted by Michael Offutt, Phantom Reader at 12:08 AM

Email ThisBlogThis!Share to TwitterShare to FacebookShare to Pinterest
Labels: Maybe Mr. Robot's real message is to show how incredibly damaging mental illness can actually be on a society if not outright question why society even exists in the first place, Mr. Robot