The human race may get to explore Proxima B with iPhone-sized probes sometime in the relatively near future. 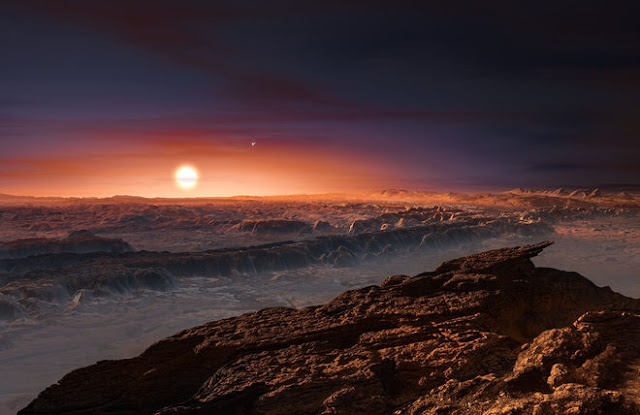 I love the idea of Proxima B.

If you haven't heard, the star right next door to our own in this unimaginably vast universe has a planet that orbits a red dwarf star within its habitable zone. Scientists refer to this as "the Goldilocks zone" where it may be neither too hot nor too cold. This means (essentially) that liquid water could exist at the surface, and nearly everyone that's at all scientifically literate knows that liquid water is essential for much of the life (that we understand) to exist. Exciting, right?

But the most exciting thing about this discovery is that this planet just might be possible for us to reach with today's technology. How you might ask? Well for starters, it's 4.2 light-years away (or 25 trillion miles), which is close on a cosmic scale. So that you can better visualize this, if the sun were a basketball in New York City, Proxima Centauri (the red dwarf star whose planet has captured the imagination of Earthlings) would be a marble in Honolulu, Hawaii. Agreed, that's a super vast distance. However, it is possibly doable within the lifetime of your children because of multiple probes that are the size of an iPhone.

The project I'm talking about is called The Breakshot Initiative. From their page that I've linked to, I quote the following:


"In the last decade and a half, rapid technological advances have opened up the possibility of light-powered space travel at a significant fraction of light speed. This involves a ground-based light beamer pushing ultra-light nanocrafts--miniature space proves attached to lightsails--to speeds of up to 100 million miles an hour. Such a system would allow a flyby mission to reach Alpha Centauri in just over 20 years from launch, and beam home images of possible planets, as well as other scientific data such as analysis of magnetic fields."

The Breakshot Initiative is a privately funded team of scientists and technology titans. Two of the team members on it are the Russian entrepreneur Yuri Milner and the theoretical physicist who needs no introduction, Stephen Hawking.

But that isn't all. Scientists already have gathered enough information about Proxima B to make some good educated guesses as to what they may find. For one, it's most likely tidally locked (just like our moon). Some might interpret this as having one hot side with the sun locked in one spot, and one cold, with ferocious weather at the horizon. But this could be wrong for a number of reasons.

Anyway, Proxima B is the kind of news that dropped that sets my imagination afire (and gives my mind a break from election/political fatigue). I think it's not even worth saying that science fiction writers have just been given some amazing fuel, and that we should all hit our word processors in a race to write the best novel about our closest neighboring star.
Posted by Michael Offutt, Phantom Reader at 12:20 AM

Email ThisBlogThis!Share to TwitterShare to FacebookShare to Pinterest
Labels: Proxima B, The Breakshot Initiative, The human race may get to explore Proxima B with iPhone-sized probes sometime in the relatively near future