Has America changed or do Americans still believe in humility and gentleness and civility at the end of the day?

It's been a whirlwind couple of weeks in politics. The DNC just finished wrapping up an astounding convention by nominating the first woman for President of the United States. I listened to incredible speeches made by Michelle Obama, President Obama, Bill Clinton, and Hillary herself. I listened to republicans like Michael Bloomberg take Donald Trump to task. It was all fascinating.

I talked about this in brief with my friend, James, who sent me the picture below.

My response was to say, "Funny cartoon, but I (of course you know this) am very excited by my democratic nominee. So it's not vomit or poop to me. I sent her money. 🙂 But I know you feel very differently (and respect that). I've watched the DNC the last three days. Michelle and Barack and Bill knocked it out of the park." To which James responded with another picture: 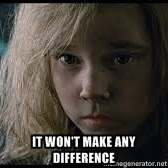 And I wonder if he's right. David Brooks, the conservative opinion columnist for The New York Times, wrote yesterday that "It could be that in this moment of fear, cynicism, anxiety and extreme pessimism, many voters may have decided that civility is a surrender to a rigged system, that optimism is the opiate of the idiots and that humility and gentleness are simply surrendering to the butchers of ISIS. If that's the case, then the throes of a completely new birth are upon us...if that's true it's not just politics that has changed, but the country."

So yeah, I guess I'm wondering if the country has changed. I guess we won't know until the November election but I hope that humility and gentleness and civility are still the things that Americans will embrace at the end of the day instead of fear.
Posted by Michael Offutt, Phantom Reader at 3:29 AM

Email ThisBlogThis!Share to TwitterShare to FacebookShare to Pinterest
Labels: Democratic National Convention, Has America changed or do Americans still believe in humility and gentleness and civility at the end of the day, Hillary Clinton