Is shared universe franchise television the answer to a flooded market? 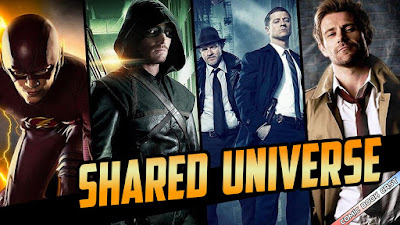 In case you didn't know about this, the C.E.O. of FX television (John Landgraf) said in August (before the TV Critics Association) that there's a bubble in the television industry. He said that there are too many scripted television shows, which leaves audiences and content creators in a bad position. When asked about why he thinks there's a bubble he said, "I can tell you that I went from someone who could keep track of every show...to absolutely not being able to keep track of every show." In the same address, Mr. Landgraf also indicated that it is now difficult for people to find great TV.

At first, I think it would be easy to say that there's a lot of similarity with what Mr. Landgraf is saying about the state of television and what was said by institutionalized businessmen at the top of the traditional publishing pyramid just a few short years ago. I remember reading articles about how the plethora of books put out by self-published authors was just a tsunami of crap. As the metaphor went, the tsunami would just pull everyone under so that no one could make any money any more. There would be no "incentive" for anyone to write books; the truly good ones (which naturally only the traditional publishers are capable of finding) would never see print because they'd all be out of business. Basically, it would be a literary apocalypse.

Circling back to television, I know it takes a lot of money to produce a show. Daredevil on Netflix cost $3-4 million per episode, and I think The Flash on the CW costs somewhere in the neighborhood of $1-2 million (which I attribute mostly to the reusing of locations between their franchises). With that out on the table, it is easier for me to look at what Mr. Landgraf is saying from a "business" perspective and admit that he's probably not entirely wrong. Shows absolutely have to attract enough viewers or they can't support advertising which pays for all of the programming. This is partly why (when I watch things on DVR) I rarely fast forward through commercials. I must support the industry that pays for all the eye candy that I watch every day, right?

I suppose what I'm saying is that scripted television simply can't be done without a skilled team of people all working toward a common goal. Books on the other hand can be done by one person who acts as publisher, author, cover artist, editor, etc. And that's probably why I don't really worry about the book industry. After all, writers produce material because they have to and not because they're paid to do it. I don't think this is true for scripted television shows.

However, I'm not in the business of producing television programming like Mr. Landgraf is, so I don't know the numbers. From a consumer point of view though, I have no problem picking out the shows that I watch. Sure, it requires dedication and reading of blogs like io9 that have teams of writers assigned to following different shows during a week BUT I CAN DO IT :). Because of io9, I'm currently blazing my way through Person of Interest on Netflix (and have been finding it thoroughly enjoyable). I've also consumed How To Get Away With Murder (based on reviews...and yes it really was frickin' amazing). These are incredible shows that I didn't watch live because I was watching something else. So maybe who Mr. Landgraf was talking about isn't me. He's talking about the casual middle class consumer that subscribes to basic television and waits to watch shows that can be shared as a couple. You know, people with kids enrolled in sports and only a few hours a week where there's time to relax...this as opposed to people like me burning through television series like someone that has no life and is screaming, "I need my next FIX! GIMME GIMME GIMME" which is honestly how I feel when an episode of The Walking Dead or Game of Thrones ends.

So let's assume that Mr. Landgraf is right and I'm wrong. Let's assume that there can be a "bubble" in television and that at some point there just won't be enough viewers to support all of the shows and as a result a lot of our favorite shows will just go extinct. Remember Firefly? Kind of like that only on a mass scale, and that's just simply recognizing that "Firefly" seems to have some kind of absurd life with people who follow science fiction when in my opinion it was simply "above average." But this blog post isn't about how everyone seems to have jumped on the "Firefly" bandwagon making it seem like the show was somehow this spectacular brilliant phenomenon when it really wasn't even as well written as The Walking Dead, Game of Thrones, or Breaking Bad. So if we assume that there's a bubble, then the next question is, "What is the solution?"

I think this very thing is behind why we're seeing so much shared universe franchise television being made. The CW has a shared universe Justice League of America thing going on, we just recently learned that Bones (on Fox) and Sleepy Hollow (also on Fox) share a same universe, and then there's the whole "Chicago Trilogy" (which is very successful) on NBC: Chicago Fire, Chicago Med, and Chicago P.D. We have yet to see if Supergirl will join the CW's Justice League franchise or if it exists on its own in a separate universe (which is what we must assume). Personally, I think shared universes are awesome because I like the characters I love to be interconnected through plots and stories. Just look at the Marvel movies. Who here doesn't think that the way Disney brought together the Avengers was simply spectacular. Would it have been as cool if we didn't have the separate films of Thor, Iron Man, and Captain America? I'm going to say, "No."

So in a way, a flooded market or "bubble" (if you will) is forcing television to up its game. Maybe that's what Mr. Landraf is actually complaining about when he talks about "bubbles." He's complaining that it's harder to make television that people will watch now. A big corporation complaining that they have to work harder to satisfy consumers? I think that's something I can get on board with and enjoy. What do you think? Is there a bubble in television? Is it hard for you to find a television program to watch?
Posted by Michael Offutt, Phantom Reader at 12:35 AM

Email ThisBlogThis!Share to TwitterShare to FacebookShare to Pinterest
Labels: Is shared universe franchise television the answer to a flooded market