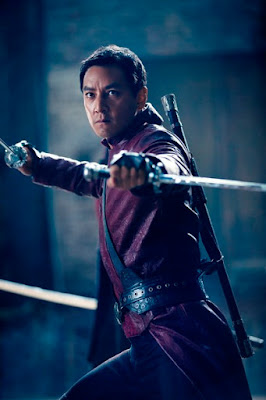 So AMC premiered their new series "Into the Badlands" last night right after their weekly dose of "The Walking Dead." I gotta say that it hit most of my Quentin Tarantino fanboy buttons. The credits were wonderfully done in full comic book story board mode with silhouettes and samurai swords. The filmography was beautiful with the over-saturation of color doing its part to make me feel like this is a fantasy world where the rules are different.

I liked the very Steampunk-esque vibe I got from the show too. It seemed to play well with the absence of guns, the prevalence of martial arts, and the setting that was part poppy field and part Louisiana bayou. The characters that we met are named: 1) The Widow, 2) Jade 3) Lydia 4) M.K. 5) Veil, and 6) Sunny. Those are all the ones that I could remember. Sunny is a complete badass that channels Jet Li and Jackie Chan in every scene and M.K. is the mysterious boy with strange berserking powers that only emerge if he tastes his own blood. The mythology of the world is set in the distant post-apocalyptic future where (apparently) opium is highly valued, Barons (white people) are warlords with armies of ninjas, and where people in "The Badlands" hear rumors of a better life in the great ether that lies beyond the known world. These are all themes that go into every post-apocalyptic story. After all, you can't have an apocalypse without hope.

And "Into the Badlands" I think has plenty of hope going for it. Sunny is going to be a father, so there's urgency for him to want to seek out the truth behind those rumors of a distant land where people aren't killed for having children. M.K. adds fuel to the fire of Sunny's imagination by verifying that he came from that place...only he doesn't know how to get back. Of course, right? That'd be too easy. And the other Barons are circling Sunny's Baron, which is bad because I think if Sunny's Baron dies it's kind of like a medieval Japanese society, and he'll be expected to die with his lord.

All in all though, I was amazed by the big fight sequences. It's exciting that there's a martial arts drama with no skimping and the action is as good as in any movie. I guess I'm just going to hold on and enjoy the rumble. So did any of you catch "Into the Badlands" last night?
Posted by Michael Offutt, Phantom Reader at 12:22 AM

Email ThisBlogThis!Share to TwitterShare to FacebookShare to Pinterest
Labels: Into the Badlands, Into the Badlands on AMC hit most of my Quentin Tarantino fanboy buttons with its incredibly gorgeous fights