I bit the bullet and upgraded to Windows 10. For the most part it was smooth but there have been bugs. 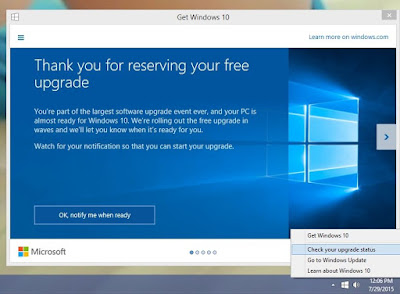 I upgraded to Windows 10 on Wednesday. My previous operating system was Windows 7 Ultimate, and I felt like it was time to make the jump even though there was technically nothing wrong with my computer and the way it was running. I did reserve a copy of Windows 10, but I didn't want to wait for my upgrade prompt. If you happen to be one of the few that are still waiting (or just never received one) you can go HERE to download and install Microsoft's Media Creation Tool. You'll launch it when you finish. To be clear, this is only for people making the update and not doing a clean install.

And before you upgrade, you'll want to have your Windows 7 COMPLETELY updated with all Microsoft patches. I've done this on several computers now, and the update screws up if your computer has any malware on it or if you are missing some critical updates. For example, I just installed Windows 7 on a computer and made the jump to Windows 10 thinking that it would be quicker (rather than waiting for all of the updates to install) and instead a weird bug caused the "Settings Applet" to keep crashing. This wouldn't be all that important, however, the "Settings Applet" is now where the Windows Update utility is located. If you can't launch the Settings, you can't get important updates pushed out by Microsoft. So yeah, that didn't work. Lesson learned. Update the old operating system completely before making your migration.

Once Windows 10 is installed on your computer, there may be bugs (Microsoft did not put out a perfect product--big surprise, right?). Some that I've experienced are that my Norton Security Suite and Cyberlink Power DVD appear to have issues. There's an update for the Cyberlink Power DVD that I use to play Blu-Ray movies on my computer, but it costs $50.00, and I assume it's compatible with Windows 10. The old version I use (version 11) has some issues where it won't shut down once the app is launched and you have to restart the computer. I think I'll look online for a free Blu-ray player that has Windows 10 support (not that I use my player much these days as Netflix has everything that I watch). If you know of any, please let me know in the comments :). As for my Norton, it's offered free through my Xfinity subscription. Since it's so buggy, I just downloaded the uninstall tool and uninstalled it. I'm using Windows Defender now which actually seems to be pretty good and has no bugs at all (being a Microsoft product).

Then there's a strange bug that's happening with my Motorola cable modem. It sometimes loses its internet connection when I restart because it can't get an I.P. address issued from the computer and shows as an unidentified network. If I do a complete shutdown and then start up the computer cold, it will start working again. I'm not sure if it's some kind of compatibility issue with the new operating system or if I should see if there's some updated firmware available through Motorola. It's not too much of a big deal because when I upgraded my computer a year ago, I bought a Haswell system with a motherboard that included wireless and bluetooth capabilities. So when the ethernet goes down, it just automatically logs onto the wireless signal.

All the drivers updated to the new system pretty easily. If you don't know what drivers are, they are what make all of the hardware on your computer work. So when a driver isn't working, it's trouble for your pc. Gripes I have about Windows 10 include the following: 1) because Microsoft's servers are overloaded with people downloading and upgrading, your own computer automatically gets enslaved to the Microsoft botnet so that critical files can be downloaded to other people's computers (you can turn this off), 2) Microsoft saves your old version of Windows as a temporary file that you need to find and delete (mine took up 32 gigabytes and I don't need a backup because I got one on an external hard drive), 3) Microsoft trademarked "Windows 365," which means that they probably intend to eventually move Windows 10 to a subscription based model.

If you don't know what subscription-based software is, then think of Microsoft Office 365 with a recurring cost of around $10 a month. It's my opinion that there will probably be ads on the operating system at some point in the future if you don't pay. Either that or some features may not be available (like automatic updates). It disturbs me that every company is moving to subscription-based service because recurring costs are essentially like interest. You can't ever get rid of them and they will keep you in the poor house if you don't find a way to control all the subscriptions. Personally, I think recurring costs are the death of wealth. More and more we are a society where upward mobility is becoming increasingly impossible as corporate forces keep pushing us down.

If you are still hesitating upgrading from your trusty old Windows 7, keep in mind that Windows 10 has far better security and loads faster. It also has better multi-monitor support (which is fantastic).
Posted by Michael Offutt, Phantom Reader at 12:20 AM

Email ThisBlogThis!Share to TwitterShare to FacebookShare to Pinterest
Labels: I bit the bullet and upgraded to Windows 10, Windows 10