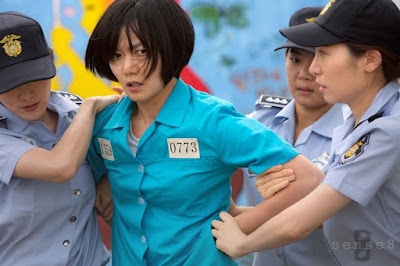 This week, I've been blazing through Netflix's Sense8. It took a little while for the Wachowski's latest venture (albeit a collaboration with J. Michael Straczynski) to grow on me, but grow on me it did. This global story (and I have no idea how to describe it otherwise) features 8 people who are psychically connected and can experience each others lives, council one another, and even help them out by taking control of their bodies to give them skills they wouldn't otherwise possess. I'm going to take a moment and talk about the characters in the show that I'm most taken with.

Capheus is a teenager that lives in Nairobi, and he's extremely poor with a sick mother who needs medication to live. In a touching character arc, Capheus gets robbed of the medication that he was trying to get to his mother when the spirit of Sun Bak (a Korean woman living in Seoul) basically takes over his body and uses her martial arts skills to take all the robbers out. He repays the favor by giving Sun Bak counselling when she really needed it so that she can make a decision on something so terrible that it will affect her life forever.

Then there's Nomi Marks, a transgender character, who's compelling story is so fraught with pain and emotional anguish that it really makes her a contender as the most interesting character featured in a television series in 2015. Nomi is kind of at the center of whatever is going on with the 8 psychically connected people, and she comes from a family that would prefer to live in denial of who she is (to the point of forcing a lobotomy on her) than try to see their daughter as the beautiful person she has become.

But my favorite characters are Kala and Wolfgang. Kala is Indian and prays to Ganesh to stop her marriage to a wealthy, young, handsome man whom she does not love. Wolfgang lives in Berlin and through their psychic connection, they share one of the most touching moments in the series where they are simultaneously talking in a rainy and cold outdoor cafe in Berlin and under the Hot noonday sun of Mumbai. He asks her, "So you think that Ganesh caused this? That what's happening to us is a miracle?" And she replies, "I think that 'miracle' is a word that is supremely appropriate."

I have to say that Sense8 is one of those shows where character revelations, the tenderness of each character to one another, and the idea that there is more to life and love and reality than we will ever understand all come together in a spectacular fashion. I don't know how many scenes there were in this that fiddled with my emotions, but there are A LOT.

In Sense8 the characters actually trump the world-building and the visuals, which is impressive because the Wachowski's are huge world builders and rely upon some amazing visuals in everything they do. Is it a masterpiece? At this point (and with my Magic 8 Ball at the ready) signs are pointing to yes.
Posted by Michael Offutt, Phantom Reader at 12:55 AM

Email ThisBlogThis!Share to TwitterShare to FacebookShare to Pinterest
Labels: In Sense8 the characters trump the world building and the visuals which is impressive because the Wachowski's are all about visuals, Sense8