Game of Thrones just had its obligatory "White Walker" episode, and I actually wasn't expecting it. Jon Snow arrived at Hardhome, the place where the wildlings decided to hole up to see if they could survive while someone, somewhere came up with a real plan? Even with circumstances as desperate as they were, many of the wildlings still threw Jon Snow's offer of safe harbor south of the wall back into his teeth.

That (of course) was what happened before the White Walkers showed up. I have to say, the howl of the winds raised goose pimples on my arms (I have a decent surround sound system). Preceded by a ghostly blizzard that kind of dropped off the bluffs and cliffs surrounding the bay in which thousands of people had gathered, a zombie army that was worthy of a season finale for The Walking Dead assaulted the wildlings desperately trying to escape into the bay where ships waited to take them south.

Oh and one of my theories about Valyrian steel came true tonight. I'd hypothesized that valyrian steel could kill a white walker the same as dragon glass in a blog post I made some time ago. We haven't seen this in the books, but that little plot detail was revealed when Jon Snow became the second man on earth to end a White Walker. 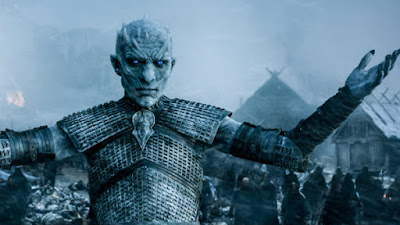 To those of you who watched last night's episode, did it seem to you that there was some kind of weird connection between Jon Snow and the Night's King (the White Walker that raised all of the dead in Hardhome at once)? I don't know what's going on with that, but it almost seemed like the Night's King was staring him down as if it were showing Jon that he belonged with them.

Maybe I'm reading too much into the show, but I don't think any of that was coincidence. Given the Night's King's dubious background (he was probably a former "Commander of the Night's Watch") I'm tempted to think that Jon Snow may be destined to join the side of evil at some point. Good lord would that be awful.
Posted by Michael Offutt, Phantom Reader at 12:13 AM