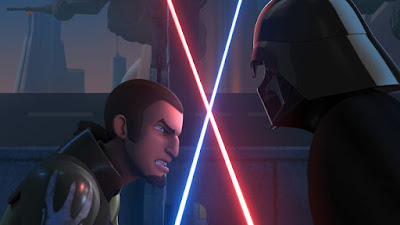 Star Wars Rebels is off to a great start for its second season. Years ago when I was in college (this would have been around 1990 or so), I was involved with the Star Wars RPG put out by West End Games. At the time, I mostly ran these modules for my players (put out by West End) and some of them were really well done. They all had the Ralph McQuarrie artwork on the covers and I modified some of them to feature "run ins" with the big bad himself, a.k.a. Darth Vader (always with an escape in mind because no one can really defeat Vader except Luke). I always expressed to my players that the money behind Star Wars really missed an opportunity by not featuring a television series that occurs in the time period between Episode IV and Episode VI by following the escapades of another group of rebels. I'm glad to see that almost thirty years after I had that idea, that an animated series is doing just that.

Star Wars Rebels is fun. We all know that Vader cannot be taken down by anyone but Luke, and we all know how much of a badass he really is. But that doesn't mean other stories can't rely upon his huge shadow to throw darkness and dread over everything. And having a common enemy to fight against really brings out the best in people, which is another reason why Star Wars Rebels really works for me.

Anyway, here's my wishlist for the second season. First off, I want to know more about Ahsoka Tano's involvement in the rebel alliance. I also want her to have some kind of standoff with Vader wherein (hopefully) she shows him that she's pretty powerful, and that he should fear her just a wee bit. That would be really cool. Second, I want some more aliens. Star Wars is known for its alien worlds, and I really think they've been kind of lazy giving us truly alien worlds so far in this animated series. One of the best episodes from the Clone Wars featured Anakin meeting this sister and brother combo that were embodiments of the Force itself (which came across as kind of magical and wizardly). It was really interesting. I'd like to see some more of things like that. Finally, I want to see some "Mission: Impossible" style episodes where Ezra's crew does some pretty spectacular things for the Rebel Alliance. Ideas like stealing new ship plans from the corporation that makes the tie-fighters or encountering spooky dangerous aliens from another part of the universe outside the galaxy on a derelict ship (cue music from Alien) could work really well. How about giving us some force vampires? Wouldn't that be interesting?

So if you are a fan of Star Wars, and you watch Star Wars Rebels, do you have a wishlist? If so, what's on it? I'd like to know.

Posted by Michael Offutt, Phantom Reader at 1:17 AM

Email ThisBlogThis!Share to TwitterShare to FacebookShare to Pinterest
Labels: I have a wishlist for Star Wars Rebels but the second season opener really got my attention, Star Wars Rebels