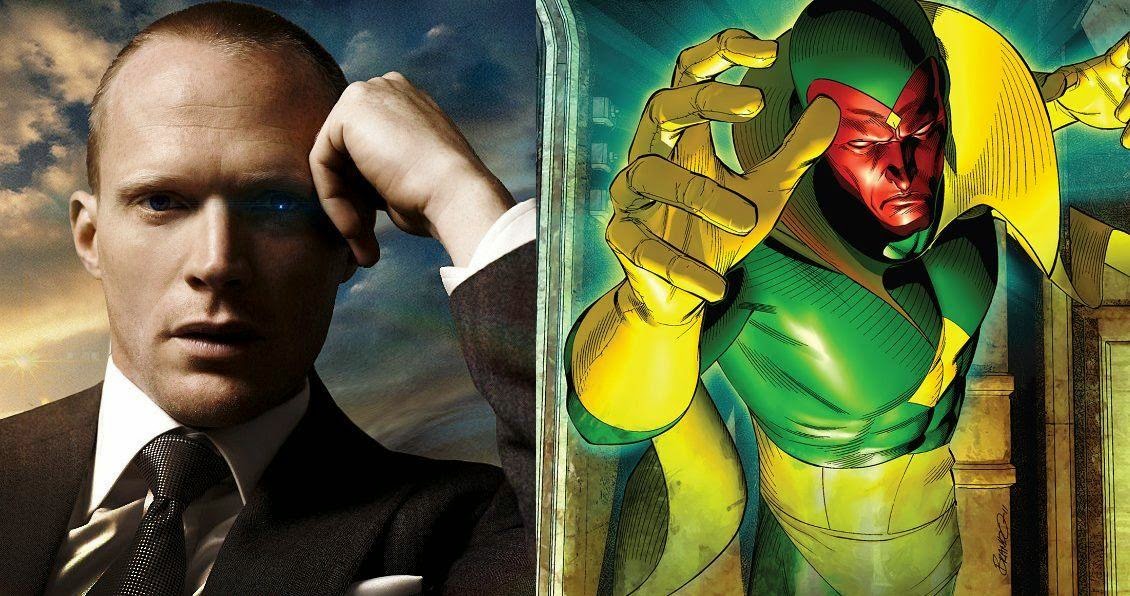 With Disney's announcement yesterday of the Avengers 2: Age of Ultron synopsis (you can read it HERE), I thought I'd talk about The Vision because he's one of three newly anticipated characters that we'll be meeting in the new movie next year (you got a taste of Quicksilver from Fox's X-Men: Days of Future Past).

The Vision looks human, but wears a green cap thing that matches his green "skin-tight" one piece (do they call this a onesy?). He has a red face, wears yellow gloves and boots, and sports a yellow cape. He's going to be played by Paul Bettany who's been heard and not seen in the Iron Man movies (as the voice of the computer J.A.R.V.I.S.) as well as being in a number of high profile films (DaVinci Code, Master and Commander). It's going to be puzzling to hear him as J.A.R.V.I.S. in Iron Man's helmet while he's also The Vision (I wonder if there's going to be a connection??). I say this last part in parenthesis because "The Vision" is an android (think Data from Star Trek: The Next Generation).
The robot Ultron is who creates "The Vision" in the first place (keep in mind that Ultron was created by Dr. Hank Pym who is Ant-Man. The whole reason for "The Vision" was to lead the Avengers into a trap. Of course, the Avengers manage to convince The Vision to turn against their master and join their ranks.

The Vision is described as being every inch a human being except that all of his bodily organs are synthetic. The solar jewel on his forehead absorbs ambient solar energy to power his whole body, he can discharge energy as optic beams that include infrared and microwave radiation, and he can manipulate his density so that he can fly and phase with walls or the earth. This, or to gain superhuman strength, immovability, or the invulnerability of a diamond-hard substance. He could also phase a hand into your chest and then partially re-materialize it to put his hand literally around your heart. Honestly this whole "phasing" thing is as powerful as the writers want to make it. Vision can phase with other universes or other dimensions to pull in mass and essentially become as heavy or as gravity intense as he wants to be).

In the comics, Captain America teaches him unarmed combat. Aside from that, The Vision has the android mind capabilities of information processing. Nice, right? I'll take all the information available on Google for $100, Alex. So yeah, The Vision is really really smart. And from what I understand about the Avengers: Age of Ultron, The Vision may develop a thing for the Scarlet Witch (another new character). In the comics, he reproduced with her, so yeah, there is at least a precedence to my speculation. But I think Marvel loves it when we all speculate on things, hence the "broken shield" prop that was unveiled at San Diego Comic Con. What the hell does this mean? I'm assuming that Ultron cracks it, but how Vibranium gets cracked is beyond me (it's indestructible). Now, the last time that this happened was also in an Age of Ultron comic book crossover. Here's a panel from it for you to examine: 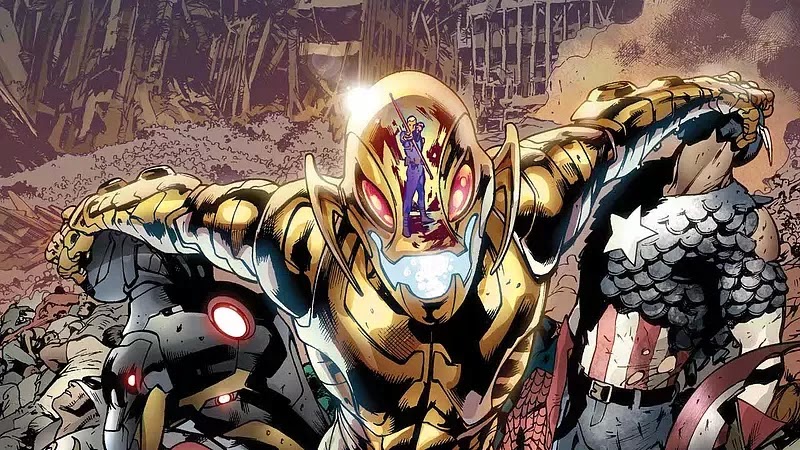 And then there's the image of Captain America without hope, sitting in a corner with his head down. This'll be a great scene for Chris Evans to do. I just hope Black Widow or Iron Man gets him to snap out of it. I can totally hear Robert Downey, Jr. picking up where Hudson left off in Aliens proclaiming "We're F*cked!" but meaning it in a fun way meant to drive someone who is obviously in a funk out of that hopeless funk. 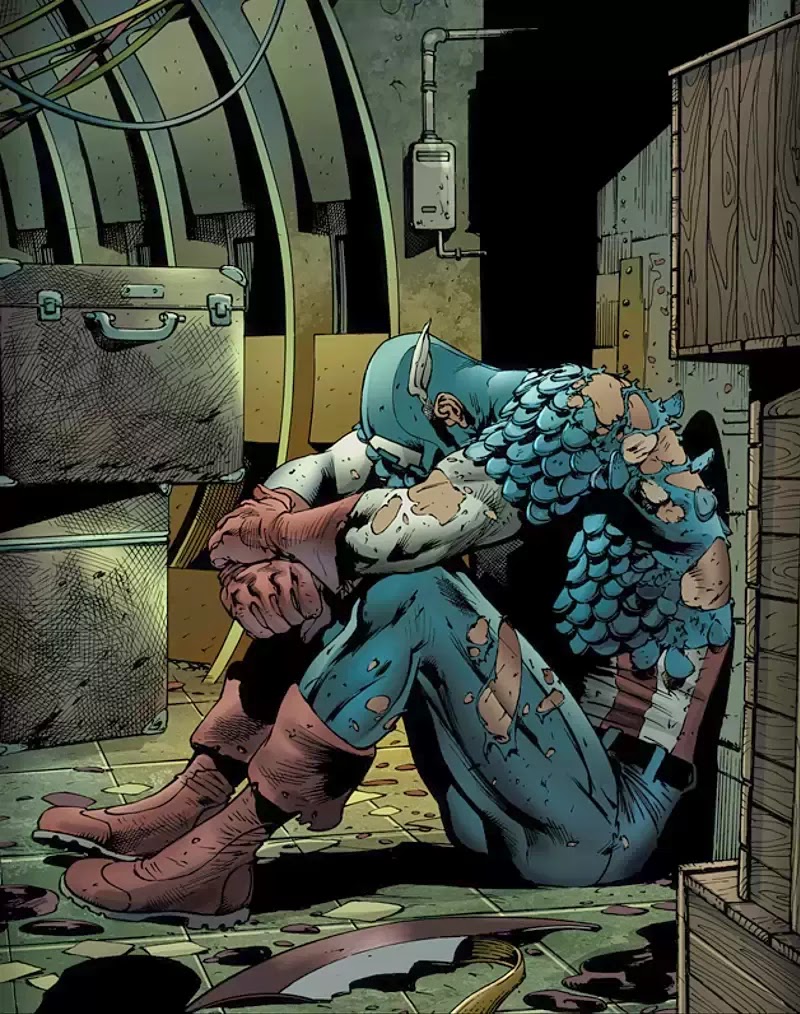 What I'm hoping they DON'T do is get the Scarlet Witch to pull a "Twilight" esque vision where the Avengers see a possible future where Ultron rules everything and they see Captain America's shield all broken. That would be cheesy. But then again, stating that something is made of a material that can't be broken only to break it to demonstrate the power of something is the cheese from which all comics are made of. The thing is...we keep buying it in buttloads. Of course, we could get Thanos to pop in and destroy the shield. He's done it before:

However, if Cap's shield does get broken then there's only one place in the Marvel Universe where you can go to get it fixed and that's Wakanda, home of the Black Panther. This means (of course) that we'll finally get a black guy in a major starring role in one of the seriously white-washed Marvel films. Yay for diversity. Anyways, here's a toast to speculation in all of its wonderfulness.
Posted by Michael Offutt, Phantom Reader at 6:59 AM

Email ThisBlogThis!Share to TwitterShare to FacebookShare to Pinterest
Labels: A survival guide to what you can expect from Marvel's Age of Ultron, Age of Ultron, Captain America's Shield, Marvel's The Avengers, The Vision