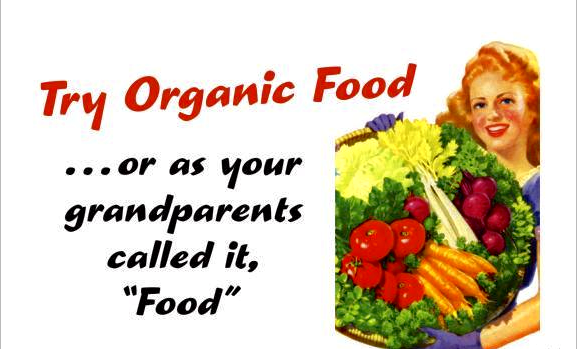 Author Lisa Bonet got in touch with me about an article I wrote a little while ago that she read on my own personal corner of the internet here at my blog of all places! (squee...I have readers). The title of my piece was "Natural organic food is filled with chemicals you can't pronounce," and it can be found HERE if you really want to read it (please don't confuse it with my other healthy article entitled "A perfect rationale for eating cake on a Friday."). Well, Lisa came across my article in a random Google search, and asked me if I could share her article with my audience (and of course I immediately answered "Yes!") because it seeks to answer the question, "Is Eating Organic Food Actually Better for You?" And if you are a price conscious consumer, you've asked this question. I know you have.

Lisa's original article can be found HERE. Lisa's also given me permission to cut and paste it on my blog so that you can read it without changing websites. However, please keep in mind that the below article is not written by me. Personally, Lisa's information comes at a time in my own life when I weigh pro's and con's of taking extra money from my budget to apply to organic food. So without further ado, here is Lisa's article:

Is Eating Organic Food Actually Better for You? by Lisa Bonet

There are various reasons why you may choose organic produce, from protecting your health and the health of those who work in agriculture to preserving the environment. However, with organic food costing significantly more than standard produce, if you are most interested in its potential health benefits, you will want to know whether the extra cost is really worth it. It’s no surprise you may wonder this, as with conflicting reports on the nutritional value of organic crops, you want to make sure that your money is well spent, as on a tight budget organic produce is a luxury.

A piece of research by scientists at Stanford University, which reviewed the evidence for the health benefits of organic food, was widely publicized in 2012, though, unfortunately, their findings didn’t support the theory that organic produce is richer in micronutrients. However, what you may not have heard about was a similar research paper published the previous year by a team from the UK. While the researchers at Newcastle University acknowledged that organic fruit and vegetables are not nutritionally superior for many nutrients, they discovered this fresh produce offers significantly more vitamin C and polyphenols, in total offering a 12% higher intake of nutrients. Both have antioxidant activity and their consumptions may help to lower your risk of developing cancer, heart disease and other chronic health problems that impact on both quality of life and lifespan. Based on their findings, they estimated that for each day you eat organic fruit and vegetables rather than standard items, without increasing your overall intake women gain an extra 17 days and men an extra 25 days. So for some nutrients organic items are a better bet and this may in turn offer health benefits.

Pesticides are used routinely in non-organic farming to control weeds, insects, fungi and other microbes, though use of pesticides is greatly limited when organic practices are used and even then these pesticides are produced from natural substances rather than chemicals. As the goal of pesticides is to destroy or repel other living things, pesticides have the potential to harm human health. The most common health problems associated with pesticides are irritation to the skin and eyes, damage to the nervous system, altered hormone levels and the development of cancer. Farm workers who come into contact with pesticides are at greatest risk, but the food we eat has traces of pesticide residues and these pose a particular risk to certain groups of the population. For instance, due to young children’s small body size and the fact their organ systems are still developing, it is essential to keep their pesticide exposure to a minimum. For similar reasons, pregnant women should avoid pesticides as much as possible to protect their developing baby’s brain and nervous system. Seniors also seem to be at increased risk of pesticide exposure, as the body becomes less efficient at processing chemicals with age.

The Stanford study confirmed that pesticide residue intake was lower when consuming organic foods, but if you can’t afford to buy all organic fruit and vegetables, how can you lower your intake of pesticide residues? Although washing and peeling fresh produce well helps to remove some traces of pesticides, another step is to focus on only buying organic versions of fruit and vegetables that otherwise contain most pesticide. To help you out with this, the Environmental Working Group publishes a list of items yearly that highlights the ‘clean fifteen’ which contain minimal levels of pesticides and the 'dirty dozen' that contain much higher levels of residues. It is especially important to use this list if you or your family belong to one of the at risk groups from pesticide exposure.

While there isn’t as yet any strong evidence to confirm a link between the use of growth hormones in non-organic cattle and adverse health effects from eating beef or dairy produce, there is a potential mechanism through which these artificial hormones may cause harm, which is why some people choose to buy organic milk and meat. For instance, use of recombinant bovine growth hormone may increase production of insulin-like growth factor, which is possibly linked to an increased risk of cancer. There is also a concern that these artificial hormones may lower sperm counts, as research indicates that women eating meat while pregnant have sons with reduced sperm counts. The FDA argues that hormone residues in meat and milk are tiny compared to those that occur naturally, but until there is more evidence for either side of the debate, some people would rather not take the risk.

Thank you, Lisa, for sharing your article with us. So what do you think, folks? Organic or non-organic? Are you a buyer?
Posted by Michael Offutt, Phantom Reader at 7:00 AM

Email ThisBlogThis!Share to TwitterShare to FacebookShare to Pinterest
Labels: A perfect rationale for eating cake on a Friday, Lisa Bonet asks Is Eating Organic Food Actually Better for You, Natural organic food is filled with chemicals you can't pronounce, organic food