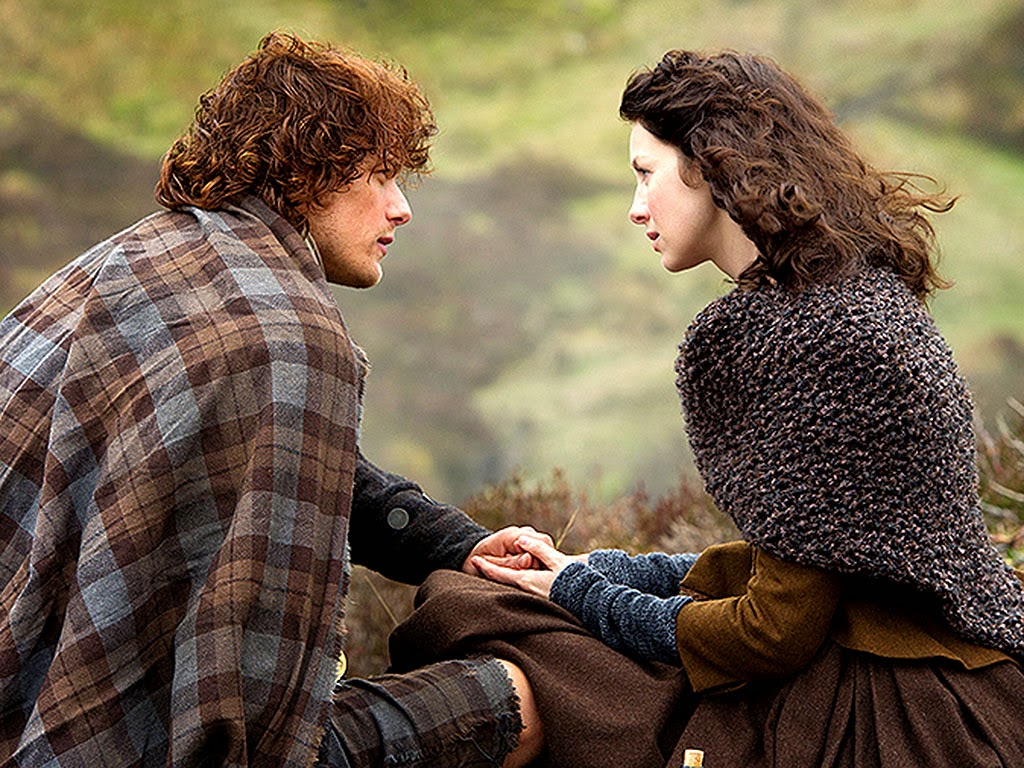 I think (for me) the Starz series called Outlander has perfect pacing. Events have been unfolding for Claire at a nice pace ever since she arrived in 18th century Scotland, and she's managed to go from being a woman suspected of being an English spy to one that's married to a handsome young Scot and has earned the loyalty of those who originally shunned her. And in this, I suppose there was some irony because Claire may have earned a portion of that trust by drinking from a magical spring, which legend says would have swollen her throat shut were she to utter a single lie during questioning. I say "irony" because I could tell that Claire didn't believe that a spring could have such properties, even though a circle of cairn stones at Craigh na Dun hurled her through time. It's interesting how she can pick and choose her superstitions when profound evidence that magic is real exists in her own life.

Even without having read Diana Gabaldon's books, it was easy to see that Claire and Jamie Fraser were destined to end up together. But I've absolutely loved the way in which it happened, seemingly as organic as two people first becoming friends and then finding something more a little further in the relationship. Starz even spent an entire episode on the wedding, going through the three demands that Jamie met in order to take his bride: 1) he wanted a real priest to marry them 2) he expected a ring to be made from a key (primarily the "bow" part of a key, which in itself taught me that a medieval key consists of a "blade" and a "bow," and 3) Claire would need the finest dress that they could get on short notice.

Instead of being some horrible plot device to save Claire from the evil "Black Jack" Randall, Jamie's insistence on details for his wedding turned the whole affair into one of the most romantic things I've ever seen. There was even courtship, with an exchange between the two of them that occurred after their wedding that went from Jamie telling Claire all about his lineage to their making love for the first time, to getting food and wine, and more sex, and well...yeah. It was pretty great considering that it could have been pretty awful. But maybe the true magic of the series is Claire, probably the best heroine I've come to enjoy in what seems like ages. Claire has this ability to see the worst of circumstances in the best light, and it's rather wonderful to see what she'll do next to get herself out of a situation. Or in the case of the cliffhanger ending of the mid-season finale, what luck will bring her when she is completely out of options and she's played her best hand only to fail miserably.

The most tense part of last night's mid-season finale though was Claire realizing she was just a hop, a skip, and a jump away from the pile of rocks that we can only assume will whisk her back to her own time period if she can only touch the center rock. Her husband in the future was at the stones at the same time on film, just about to leave when he heard her voice calling to him from the rocks. As romantic and tense as this seems, one thing I'm a little mystified with is the whole time travel mechanic going on here. It would appear that both timelines (Claire's future and her past) are moving at the same pace. So when she does eventually make it back to her timeline, whatever time that she's spent in the past will have passed for her in her future (essentially making her a "missing" person). It's an interesting mechanic because it means that time has consequence above and beyond the meddling one can do in the past that forges a divergent future. As far as time travel devices go, the rocks at Craigh na Dun are pretty stingy in this respect because if you're able to send someone into the past to live a different life, the least you could do when that journey's over is deposit them in the exact time in which they left so that (to an outside observer) you've only been gone a second. But doing it this way, Claire leaves a trail of broken hearts and broken men no matter "when" she goes.
Posted by Michael Offutt, Phantom Reader at 7:33 AM

Email ThisBlogThis!Share to TwitterShare to FacebookShare to Pinterest
Labels: In Outlander time has consequence above and beyond just changing the past to divert the future, Outlander