Do Time Lords have control over their physical aging? Watch this 50th anniversary prequel and ponder it with me. 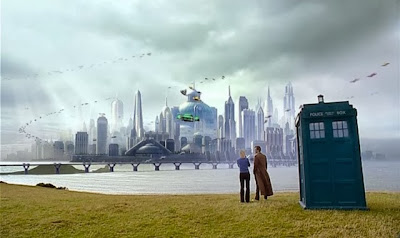 Below is a Doctor Who 50th anniversary prequel that confirms a secret of the Doctor's long-lived life. But after watching it, be ready to answer a question aimed at the serious Who fan.

Here it is: In the clip below, McGann clearly regenerates into a visually younger Hurt and we know he ages into angry old Hurt if you've followed the series. So, do Time Lords have control over their physical aging? Recall that Matt Smith's doctor took a long hiatus between the Ponds and meeting Clara but hadn't aged a day.

Yet for young Hurt to age to old Hurt that we're going to see in this weekend's Day of the Doctor, has a significant amount of time passed or did he just age himself into an old man? Seriously, this is the most important question you'll be asked this week.

If you do decide to take a stab at an answer, please provide supporting evidence.
Posted by Michael Offutt, Phantom Reader at 12:12 AM

Email ThisBlogThis!Share to TwitterShare to FacebookShare to Pinterest
Labels: Do Time Lords have control over their physical aging, Dr. Who