Today I am participating in the "This Stupid Pineapple" blogfest that is being held by Briane Pagel, Esquire over at his blog located here. To participate, all you have to do is write a post that begins with the words "This Stupid Pineapple..." and go from there. Please visit his blog so that he can generate more ad revenue and so that he'll have someone reading his 100,000 word blog posts.

Now...off to my entry of this illustrious contest. 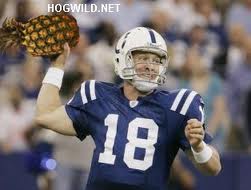 This stupid pineapple makes me think of football. Can you blame me? Afterall, the shape seems to be of similar size. ===>

And because I'm thinking of football, I've decided to pick a side for the Superbowl. This is the first year that I've really done so, and I blame Tim Tebow who got me deeply interested in a sport that I otherwise could have cared less about. And I'm serious. I really had no interest in football two months ago. And now I've made three bets with people at work, mostly because my father said that the only way a game is interesting is if you have something at stake. To test out his theory, I made several wagers from people who were more than willing to take my money because they think that the Patriots will win (that also makes them supporters of Evil).

I'm not scientific (is there science to picking a winner) when it comes to this exciting game. I merely read everything I could about the two teams and went with my gut judgement. In short, here is what I've decided upon.

EVIL = TOM BRADY
So that is my "scientific" analysis, and I did follow my father's advice in order to make my television watching more enjoyable. I hope that the adorable Mr. Manning crushes the Patriots and their evil Dark Side empire into the dirt for they seek only to suck all of the joy out of the world.

For you Patriots fans out there that are screaming revenge for the 2008 loss, I hope you lose again. But no hard feelings, okay? If there are...just remember, Briane Pagel made me say these horrible words for his blogfest. Go blame him.
Posted by Michael Offutt, Phantom Reader at 1:05 AM