How long before we have a real Robbie the Robot? 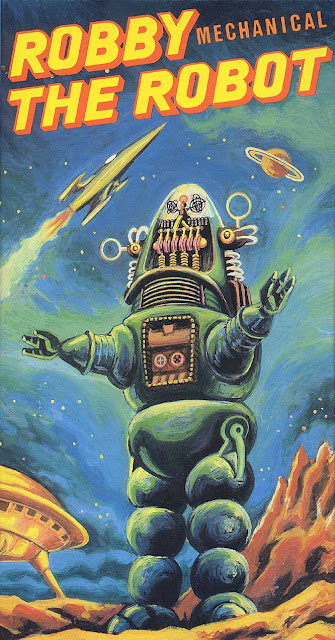 If the title of this post confuses you, Robbie the Robot was a $200,000 invention created by movie studios for the amazing 1950's film, Forbidden Planet. It cost so much, that the studio re-used the robot in several projects following Forbidden Planet and the character remained extremely popular.

I recently re-watched Forbidden Planet because I love the story so much. Some of it inspires my first novel that will be available in 2012. But aside from that, I saw a YouTube video of a real life robot that blew my socks off.

Want a sandwich? Well the robot PR2 has learned how to fetch stuff from the fridge, which is great and all, but thanks to a technique called semantic search, it can now bring you a sandwich when it's not even sure where the sandwich is.

"Semantic search" is simply the ability to make inferences about an object based on what is known about similar objects and the environment. It sounds complicated, but it's really just a computerized version of what we humans think of as "common sense." For example, if someone asks you to bring them a cup without telling you exactly where the cup is, you're probably clever enough to infer that cups can be found in drawers or cabinets or dishwashers, and that drawers and cabinets and dishwashers are all usually located in a kitchen, so you can go to the kitchen, poke around for a little bit, and find a cup. Semantic search allows robots to do the same sort of thing.

The advantage of this technique is that it gives robots the ability to infer things that it doesn't know from things that it does know, and use reason to make deductions about parts of the word that it's less familiar with. Additionally, the robot can add to its knowledge base to quickly adapt to new places and people with weird habits. So like, if you're one of those people who stores peanut butter in the bathroom, the robot can start associating peanut butter with bathrooms.

The following demo, from the University of Tokyo and Technische Universität München, puts semantic search to the test by tasking a PR2 with fetching a sandwich. The PR2 has no detailed information on sandwiches, but its database tells it that sandwiches are a type of food, and that food can be found in kitchens and restaurants, and from that, it figures out where to look.  Please watch the video and tell me what you think in the comments:
I don't know about you, but this is pretty cool.  We live in interesting times.  Asimov would be proud.
Posted by Michael Offutt, Phantom Reader at 1:04 AM