The United States in 2021 is in a really weird place in its overall history and its relationship with the idea of work. 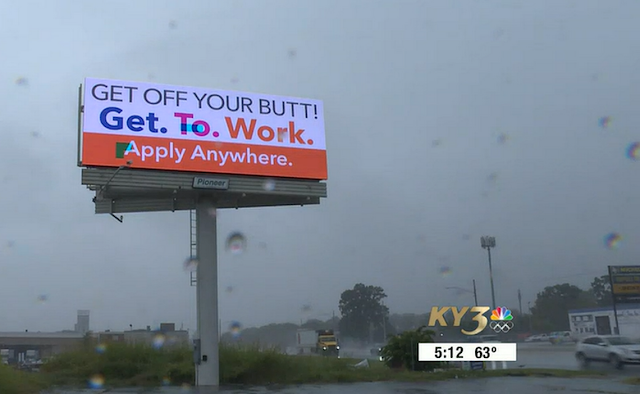 This is an interesting time to be of working age and living in the United States. Growing up, my father always railed against foreign countries usually finishing up with, "America is the greatest nation in the world. You are lucky you were born here instead of someplace else." It was a kind of strange self-awareness, but because it came from the mouth of dad I never really questioned it until I was on the other side of my university experience. I suppose that is where the critical thinking started.

So, being alive and healthy enough to work for a living in the United States has got its surreal moments in 2021. Of the people who play in my D&D group, only myself and two others have jobs. The other five don't work at all and probably don't intend to work. One makes his wife work while he sits at home and plays video games; he sometimes applies to jobs but he's underqualified for all of them and will never get them. He's the person with a high school education and who managed a Sonic once that puts in a resume to be Dean of the School of Business for Harvard University. Like really...that's what he does. Another is able-bodied and lives with a parent who coddles him like a baby and pays for everything and tells him that he doesn't need to ever work if he doesn't want to (the man baby is almost 30 and believes that being forced to work is trauma).

A third person is a low IQ individual who takes a lot of explaining in order to understand things. Somehow they qualified for SSDI at the age of 40, and they followed up with, "My life has been so much better now that I don't have to work. I spend my days reading, watching programs I want to watch, visiting with friends, exercising, playing board games, and playing video games. Because of this, I don't have the stress that I used to have that was making me sick." So...translation...I become a man-baby and play all day and as long as I have a room to sleep in and things to eat...I'm happy. Okay then. It is what it is, but it puzzles me as to why this is happening. Current events are conflicting so much with the mantra that my dad pounded into my head... "This is the greatest country on Earth..." Is it though? By what measure? My dad obviously never had a friend tell him about "passive suicide." I recently had this conversation, so that I would understand why a friend made the choices that they did that were unhealthy for them. I was like...okay then. I validate you. A man should have a right to dictate the course of their own life. Ironically, I think a lot of "despair" has its origins in the Americanized idea of "work." The despair sets in when people realize that the kind of work that they really want to do is unavailable to them. Instead, the kind of work they can find is oftentimes a steaming pile of doo doo on a tin plate.

And in writing this, I seem to have sparked a realization that I have a lot of friends who don't work. There's the 44 year old woman who essentially plays all the time, because doing actual work is stressful and depressing and causes anxiety. She lives at home with her mom and they rent out rooms to people on SSDI so that no one in the household has to work. In fact, SSDI has become so commonplace in my social circle to see, that to my observation, it is kind of startling. It's like watching people launch out of childhood to be hit full force in the face with the brutality of capitalism. These people then cave-in mentally and crumble before it, the same as a person who would seek refuge from a raging bull in an arena. And then they cower in fear and safety behind a shield of SSDI for the rest of their lives. So the new life cycle for many people seems to be childhood until 25...a few years of work wherein you run screaming...SSDI by the age of thirty and essentially a permanent retirement of "getting by" and hoboing around with dozens of sexual partners and casual drug use until one passes from the Earth.

What's different is that in 2021, people are saying, "Hell no! You can count me out!" And it's causing a huge problem globally. I've never been so fascinated by people walking away from work and essentially, going it alone to try and find some version of retirement or freedom, whether it is living off of another person, living off the government, or being a brazen thief in what's called "organized shoplifting." If you aren't familiar with this last one, you need to check out this article HERE that explains why Walgreens has closed 5 stores in San Francisco alone due to the phenomenon. There are amazing videos of people walking out of Home Depot stores with carts filled with merchandise...just going out the door...and pushing and punching anyone that gets in the way. They are literally daring the staff that work in these stores to do something. And then they just drive away with the goods that they sell through some other place at a later date. It's like my microcosm of a world has gone nuts all at the same time.

There are Republican pundits who say outrageous things on Fox News like, "We need to force people back to work." There are others who buy up billboard space to chastise those who drive by them with the message, "Get off your butt! Apply Anywhere!" Or something similar (I'm seriously not kidding...just google it). On the first note...I have questions...what does this "forcing" look like? Cause, from my perspective, that sounds like trauma in the best of light. And as someone who has received the message (or gaslighting depending on how you want to look at it) that work gives a person meaning and makes their life better...this doesn't jive with that message. I mean...if you have to drag someone kicking and screaming to do a thing...isn't that "without consent?" Aren't we, "The land of the free" or was that more gaslighting? If something is without consent...isn't that against the law? Like what the hell? And regarding the billboard messages, I don't know what planet the people who bought and paid for such a thing came from, but shaming someone to do a thing doesn't work anymore. It's almost laughable. We are a society of shamelessness...of grifterism...of just flagrantly doing things to get attention, because we are attention-starved. Ringing the "shame bell" is not going to work on anyone. No one cares anymore.

So, it's a strange time to be alive. I oftentimes find myself in the company of a dozen people knowing full well that I'm the hardest worker in the room. And it's a bit unsettling. Dwayne Johnson wears a shirt that says, "The hardest worker in the room." He takes pride in that, and he does inspire me and millions of other people. However, I don't wear that shirt out of personal choice. I never wanted to be the hardest worker in the room, but in America today (at least my slice of it), it's like there's been some unseen and unannounced race to the bottom, which has left me weirded out in more ways than one. At its most basic level, I think we need to seriously reconsider (as a society) what the idea of "work" actually means.

I don't think that "work gives value to a person's life." I think that wherever that bullshit came from was probably a self-help book written by a person that wanted to motivate others so that they could make money and sit back and have it easy. These days people are onto that, and everyone wants it easy. So, maybe, as a start, we could begin by acknowledging that, "Work is a terrible but necessary thing. If it is your time to work, we are sorry. We will make sure to pay you extremely well, to try and make it as easy as possible for you, and to make sure that you are taken care of when you cannot work anymore. Additionally, we (as your employer) appreciate you and will not subjugate you to micromanagement or performance evaluations as those are trauma-inducing. Rather, we will be appreciative of whatever it is that you can give us, but know your limits. We respect your boundaries." Maybe this is what work is moving toward? I don't know at this point, but it would be nice if it was.

Has anyone else noticed a profound shift in the country? Does anyone other than me out there have at least ten friends they can name that are long-term unemployed and have no prospects of ever fixing that at all? Like...ever? I'm talking about (essentially) permanently retired and in the prime of life? It's really strange, and honestly, it makes me wonder why I work so hard. I haven't figured that last part out yet. But I'm also in awe of the people who either have enough privilege or who have been smarter than me and figured out how to careen from year to year of life in America as an adult while doing nothing but play, play, and then play some more.

Posted by Michael Offutt, Phantom Reader at 7:16 AM

Email ThisBlogThis!Share to TwitterShare to FacebookShare to Pinterest
Labels: The United States in 2021 is in a really weird place in its overall history and its relationship with the idea of work