Dr. Ramani Durvasula got me thinking about the toxicity of pursuing Fame in America and how it ruins lives. 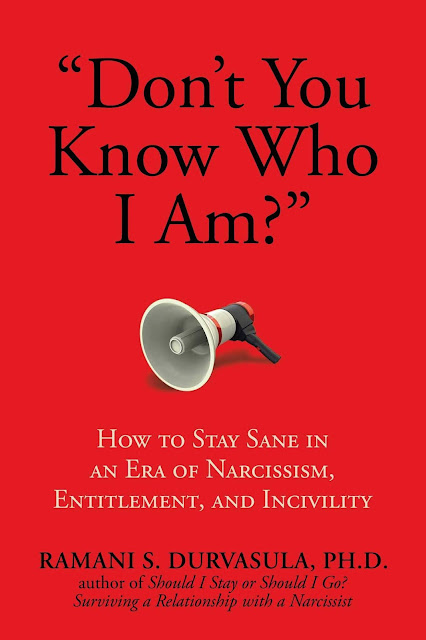 I've been reading a book called Don't You Know Who I Am?: How to Stay Sane in an Era of Narcissism, Entitlement, and Incivility. It is written by Ramani S. Durvasula, PH.D. It's one of those books that I'm progressing through rather slowly, at a pace of about 20 pages at a time. This is mostly due to the fact that I want to think about what I just read. It's also because a lot of what Durvasula talks about in the book are things I've witnessed first hand. Additionally, it's kind of fun to be the armchair psychologist and think..."Oh yea...this describes my family" or "Oh yea...this describes that narcissistic friend of mine to a tee. What an asshole they are."

And speaking of "asshole," there's a great definition of this term that I'm going to tell you about. I'd never thought of defining the word in this way. Apparently, an asshole is a "person who allows themselves to enjoy special advantages in social relations out of an entrenched sense of entitlement that immunizes them against the complaints of other people." It's a mouthful, but it kinda makes sense.

There is way too much to talk about in Durvasula's book that warrants attention (or that could fit into one blog post). But one thing did stick out in my reading last night, and that is what I'm going to blog about today. It's about fame. I'd never really given much thought to what fame actually was, but Durvasala defines it in a way that seems more meaningful than a catchphrase or a kind of force of nature/personality. Interested? Please read on.

Dr. Durvasula writes that "we humans want and, in fact, need social belonging and connection...the drive for fame then is largely our need for social belonging. Perhaps fame implies permanent social belonging, because the person will be recognized everywhere they go." Then she goes onto cite a personal example of someone who desperately wanted to be famous. When she asked this person why, they responded with, "So I am never lonely again."

When I thought about this example, I put down the book and was suddenly struck with how lonely some people must actually be. One particular example that pops into my head is Gabby Petito, the late (murdered) Instagram woman who went on a trip to see national parks in the United States with her fiancée, and their van life (though very instagrammable) was obviously a nightmare, and she was murdered by someone she trusted and her body left to rot under the sun. I wonder if she was driven to that kind of life because she was lonely. She was trying to pursue fame, and it just led to a toxic mess of abuse and violent crime.

And it got me thinking about how toxic our culture is. Americans are really good at walling off people, ignoring people, canceling people, and being mean to people. It's kind of like a super power that Americans all have. The idea of having fame seems to be a salve for that. If you are famous, then you can open closed doors. You can be invited to parties on the other side of the wall. You can feel welcome in places that are largely unwelcoming to everyone else. You can even rise above and profit from negative criticism that would destroy someone that wasn't protected by fame. So fame and fame-seeking seems to go hand-in-hand with the hatred that pollutes our country.

The more people hate, and the more people build walls to keep people out, the more important it will be for a person to have access to something that will allow them to move fluidly through all of those boundaries. Fame appears to be that "something," and it may be the most desirable commodity of all among America's youth these days. That (I think) is a bad thing for our country. For example, I can't imagine what it would be like to try and have a meaningful and fulfilling relationship with a famous person. How would they ever have time to emotionally support you when there are so many people clamoring for their attention? I think it would be a fertile breeding ground for massive insecurities unless the famous person took steps to create really firm boundaries with the public and put you at the center of what was important to them. Unfortunately, we see this kind of thing play out over and over again in the media. Those who are excellent with the boundaries have relationships that survive. Those who aren't good at boundary setting end up decimated by the public that worships them. There are so many bad things about America now though that it's honestly hard to keep track of them all. So it's just adding one more sociopolitical catastrophe onto the steaming garbage heap.

Anyway, I appreciate the thought exercise that Dr. Durvasula gave me regarding fame. And since we're on the topic, do any of you who are reading my words now hunger for fame (or do you have kids who are fame obsessed)? If so, care to share why? I'm a very non-famous person who legitimately wants to know.

Email ThisBlogThis!Share to TwitterShare to FacebookShare to Pinterest
Labels: Dr. Ramani Durvasula got me thinking about the toxicity of pursuing Fame in America, Fame and Fortune, Fame brings out a person's true colors, Narcissism