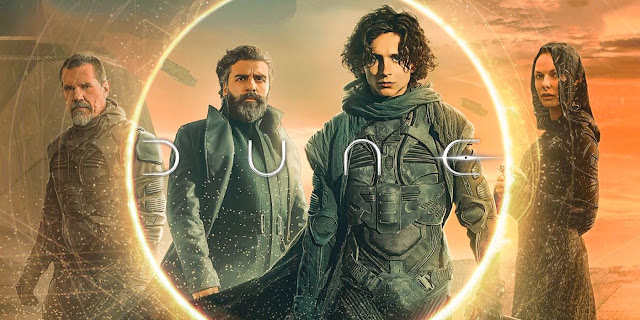 Like most of the United States, I watched Dune this weekend. I have a pretty nice entertainment system at home, and one of the people I watched with said, "Man, your sound system is kickin'! 10 out of 10." That gave me a smile. Still, I am curious as to what kind of visceral experience awaited those who purchased IMAX tickets. There will always be the allure of the absurdly large screen and a sound system that is incomparable to the ones that you can get for the small theater at home. I may check it out before it disappears from theaters. However, (and this should be obvious) it is nice to be able to watch something without the fear of catching Covid from strangers.

Invariably, I've been asked by people who know me (as I really like the story of Dune) to weigh-in on Villeneuve's version. In short I really liked it. But I cannot actually say more about it without contrasting to the 1984 David Lynch version of Dune. Even though it was universally panned, I've always liked that version, and I thought it was really well done. Sure...you never get the crysknife battles that you got in the story as David Lynch decided to elevate House Atreides combat-style with a kind of weird mechanical module that converts sounds into different types of killing effects. But for me, that was a forgivable directorial decision. All that really matters is that House Atreides soldiers are known to be some of the best in the known galaxy, trained by Duncan Idaho and Gurney Halleck, who were just amazing badasses with no comparison.

And David Lynch's unique style in that old 1984 adaptation was just so crazy bonkers that I loved it. There was gold on everything, the costuming was over-the-top, Patrick Stewart rushed into battle carrying a pug of all things, and when Paul rode the sandworms we got an eighties anthem guitar solo from Toto! I mean...it went really big in some absurd ways, and I'd argue that it really paid off. We got Jose Ferrer as the Emperor, and there's a scene where he's fighting the oncoming sandworm army from his golden ship and you see the hopelessness on his face that I just loved. There is also the strange grossness of David Lynch that suffused every inch of his film, like with the crazy eyebrows on the mentats and then Thufir Hawat having to milk his cat for an antidote to the poison introduced into his system. I wonder if we are even going to get any of that. Do I miss Sting sporting only a Batman-esque speedo? Yes, I do. 1984 Dune was a crazy show, y'all and arguably a work of genius.

So in comparison, this new version by Denis Villeneuve, is also a masterpiece. But it is a masterpiece of a different kind. It's slower in pace, and a lot more thoughtful with its screenplay. You don't have the weird inner thought monologues of the characters, and Villeneuve doesn't bombard you with explanations of how the Guild Navigators fold space. He doesn't bother you with any of the colorful minor characters like Princess Irulan and the Emperor of the known universe. Will we even see a guild navigator? My guess is, "Probably not." Instead, he keeps a tight rein on the telling of his story, and unfolds it layer by layer in a way that new audiences should have no trouble understanding. The only real characters you need to know are Paul, Jessica, Duncan, Gurney, Duke Leto, Rabban, and Baron Harkonnen. Everything else is just dressing. That list of characters is short enough for anyone to remember. Even Chani is only a blip in the movie (probably with a bigger role in part two as she becomes Paul's love interest). And it works for the movie really well. I have no complaints, and I actually really like Villeneuve's Dune in ways that I will never like Lynch's Dune. It's also just nice to have an update to a great story with all the modern special effects and a new crop of great actors, not the least of which is Timothee Chalamet who is very easy on the eyes.

This also leads me to other kinds of speculation. First, Dune isn't going to pull the box office numbers that movies pulled prior to Covid. We just haven't gotten back to that yet. But the numbers on it look extremely good despite being streamed and pirated and delayed more than a year from its original release date by a director that hated the idea of it being streamed. I'm wondering if Dune is the beginning of a franchise, similar to the MCU (Marvel Cinematic Universe). It actually lends itself really well to this kind of thing, and Harry Potter has failed in this aspect to produce a kind of universe that Warner Brothers can play in that can be a continuous cash cow for the company. Dune just might be this kind of thing, because it has really epic storytelling with a certain group of characters, and then moves on from those characters to others within the universe to tell other stories. I can't but help and ask, "What is all of this leading up to? Are we going to get all of the books in the series as movies? Boy, wouldn't that be interesting."

Anyway, if you watched Dune this weekend, please leave me a note in the comments and tell me what you thought of it. Also, do you think there will be sequels from Villeneuve within this franchise?