The lore of Warhammer 40K is a good thing but can we have good things these days? 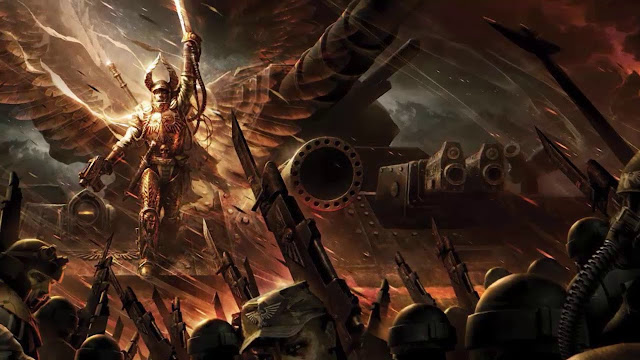 I'm currently going down the rabbit hole of online content surrounding the lore of the Warhammer 40K universe, and it's so vast that it will take weeks for me to explore all the facets of it. I'm currently listening to some very slick and polished videos on YouTube that explain the lore behind the different factions, and I find it all to be fascinating, entertaining, and deeply satisfying. But at the same time... I've got these thoughts (about one layer deep) in my head that are appalled with the fascism of the whole thing. Allow me to explain.

Warhammer 40K really goes a long ways to glorify people who are elite due to exceptional natural endowment. On the surface, there's nothing wrong with that, as it's just a fiction...a story. But I know that there are people who love this "aspect" of the 40K universe, because it strokes some deep-seeded desire to get away from a life that is (to put it bluntly) boring. Joseph Goebbels, who was the chief propagandist for the Nazis, once said that what he was doing was more like art than politics. By saying this, he meant that their task was to create an alternative mythical reality for Germans that was more exciting and purposeful than the humdrum reality of liberal democratic politics.

When I realized what was going on in all the myth-building of Warhammer 40K's lore, a lightbulb came on. I suddenly was able to explain why I've had many negative experiences with gamers as I've tried to get people together for tabletop roleplaying games. In other words, games that have fascist ideologies (that celebrate the super-human) attract real life wanna-be fascists probably about 50% of the time. And people who like or crave fascism are not fun to be around, and they aren't fun to play games with, because they crave power, and they construct their characters or their builds that throws the balance of a game off. In game circles, they are labeled, "power gamers." But I think there's a better term that I want to coin: fascist gamers.

There are so many complicated thoughts I have regarding this topic. The lore of Warhammer 40K by itself is brilliant and highly enjoyable. I also can step away from it, separate from it, and think...wow...what a strange vision of a future. It's so oppressive that there are two words (a phrase) to describe it that's pulled from the Warhammer 40K tagline: "Grim Dark." The territory of "grim dark" is where you get to when you move beyond actual dark fantasy. You know where Game of Thrones stopped by showing the White Walkers defeated? In "grim dark" stories, the White Walkers wouldn't have gotten defeated. They would have conquered the world and the story would have been about the last vestiges of humanity struggling against impossible odds. There's a place for those stories, as reveling in darkness and misery (for some) can be a lot of fun, because it isn't real.

Unfortunately, however, there are a lot of people who do want life to be a real struggle so that they can prove how elite they actually are. And a lot of them are completely deluded about their own abilities, which plays into the Dunning-Kruger effect. Life (especially in the United States) doesn't afford these experiences, because overall, most of us have it pretty good. And that's got to be absolutely aggravating to those who embrace varying degrees of elitism whether it is in a survivalist mentality or a physical perfection mentality or a racial superiority mentality or a capitalist/wealth mentaility. Taken to extremes, these things are toxic to a society like the one in which we live.

I'd say we are lucky that we don't have entertainment that appeals to people in society who desperately crave elitism, because (doing that) would turn a smoldering bunch of logs into a huge bonfire. However, if I said that, I'd be lying. Games (not just Warhammer 40K) are doing exactly that as a side-effect of telling stories wherein characters need to be the elite of the elite just to survive. These games provide a culture that rewards rudeness. Cutting the weak from the strong is a means to achieve rarified goals. It's not too difficult to realize that the non neurotypical boy who feels powerful in a game, but weak in real life, may become an adult who struggles for ways to feel powerful in their identity (and maybe secretly desire that a zombie apocalypse actually happen so they have an opportunity to prove how elite they are). The United States provides a very easy means to feel powerful: it is to own and brandish guns, to threaten politicians in State houses over quarantines, and to join groups that blame others for all the negative things that happen to you in life. A lot of people just want the myth, because the myth is so much more interesting than the reality of the situation.

In finishing these thoughts, I do want to say that Warhammer 40K lore is incredible. And there are a lot of people who I think would really have a good time immersing themselves in the "grim darkness," which is taken to absurd levels. There are stories filled with all manner of grotesqueries and powerful beings...chaos gods with armies of demons destroying mankind...and elite space marines where only 1 in a million recruits actually survives the training to become a part of a brotherhood devoted to warring against evil. And by "survive," I literally do mean that, as the training grounds for these soldiers is littered with the bones of recruits that tried and failed. That's how absurd this lore is, but it is all "constructed" as necessary, because the evil happening in the 40K universe is so powerful that even the elite of the elite are barely enough to push back the tide of darkness.

I guess what I'm saying is that it's just sad we can't have good things like this without "some people" in society taking it too seriously. I'd love to see Warhammer movies, a television series, and other kinds of media. But I worry that doing so will just feed the fascists, who will go on to create more fascists and create more problems for our society. We already have a disturbing amount of them at the head of our government and making it difficult for us to deal with a pandemic. Myths are supposed to be myths. They aren't real. The trouble happens when you get people who love a thing so much that they invest their identity in that thing. No one knows how to combat people who don't care if what they believe is true, and who view calm, factual rebuttal as an aggressive attack on their identity. That's where all of us get completely f*cked, and our society circles the drain.

We can't have good things, because people ruin everything. Que sera sera, right? At least now I know why finding good players for tabletop rpg's I want to play is so hard. I think I've got a 50/50 chance of running into a fascist in gaming circles, and now I know why.

Posted by Michael Offutt, Phantom Reader at 8:34 AM

Email ThisBlogThis!Share to TwitterShare to FacebookShare to Pinterest
Labels: The lore of Warhammer 40K is a good thing but can we have good things these days, Warhammer 40K