Broadchurch on Netflix is a story that gets a ton of mileage from the murder of one child. 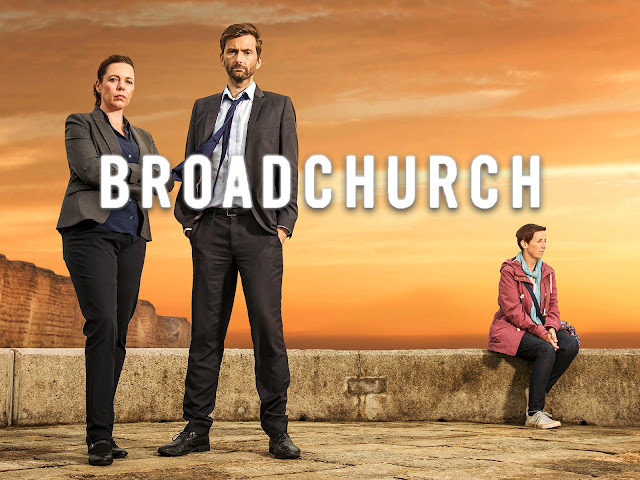 I've been watching Broadchurch on Netflix. I think this was originally a BBC production (and it still may be), because I recognize so many Doctor Who alums from it. The current "Doctor" plays a woman with a son who was murdered. As the detective work unfolds and the investigation spreads fear through a small community, we come to learn that there are many things about this idyllic village which are rotting just below the surface. And that's what makes it a good drama.

The first season of the show had one story arc, which was to finally get around to solving the question of who exactly murdered an eleven year old boy (and also why). The thing that I find remarkable about the season is that in this (at times) tediously emotional examination of one murdered child in a community, I'm seeing remarkable things. The boy's funeral and after funeral complete with sad music to really drive home the emotion features multiple fires on cliffs spanning the oceanside of Broadchurch...all for this kid who liked to skateboard, play video games, and had a paper route.

In reality I know that no one does this kind of thing. A thousand people died from Covid 19 in NYC in a day, and for the most part, nobody cares. Kids frequently show up in the news here in Salt Lake City...first missing...and then found dead in fields having been murdered, etc. The murderer gets caught or maybe they don't and that's that. There are no mountains being set afire, there are no huge sweeping scores. I kind of wonder what kind of community it would take for one death to matter so much, and how we got to where we are at in a society where the impact of a pending 240,000 or so deaths irritates people that have to keep stores closed because it will hurt the economy.

There's a break therein somewhere...either certain lives don't matter...or all lives don't really matter...and everyone is just pretending that they do. Or maybe what I'm watching, i.e., Broadchurch is basically a white racial narrative of a small English town. White boys are not supposed to get murdered in idyllic settings, and when it does happen, they will be given the burial ceremony of a Viking king. Or something like that.

Grief is a strange thing, I guess? And of course, the mother of the child is still not done after the ceremonial bonfires and the lightings of these huge torches on mountains at sunset (kind of like what happened in the Return of the King when Gondor called for aid). She needs to do more. She holds a conference with community members and states that there needs to be a foundation named after her murdered child. They are (of course) mostly in for supporting this devastated mother. But as I'm watching this I ask myself, would anyone make a foundation for me if I got mugged and killed outside a 7-Eleven? I've got to admit that the answer is a resounding "No!" Are any foundations being made to celebrate the lives lost due to this Covid Pandemic? Probably not as the bodies are just being thrown in body bags and stacked inside refrigerated morgues lining the streets of NYC.

Then maybe it's volume...maybe that's the reason. You lose one child in a community that never experiences this kind of violence, and it's worth carving monuments out of stone to last until the end of time. You kill thousands all at once, and it's a bulldozer and a ditch, and everyone gets on with their lives. I guess I want to know when exactly do individual lives matter, and why doesn't every human life matter like this?

Anyway, I'm enjoying Broadchurch. It resoundingly lies within the crime fiction category. If that's something you like, then check it out. The performances are pretty stellar, and despite the things that cause me puzzlement, I've been entertained.
Posted by Michael Offutt, Phantom Reader at 12:22 AM

Email ThisBlogThis!Share to TwitterShare to FacebookShare to Pinterest
Labels: Broadchurch, Broadchurch on Netflix is a story that gets a ton of mileage from the murder of one child