Cosmos Possible Worlds starts on Monday and I can't wait to see it. 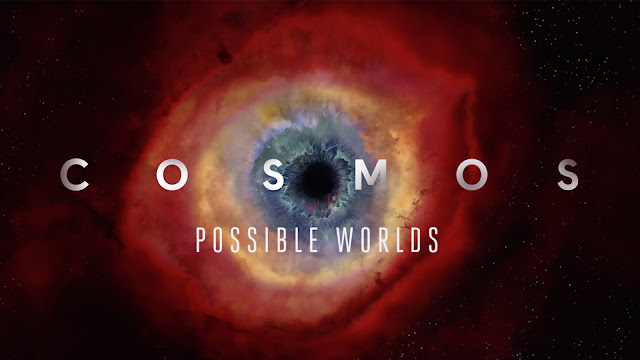 It's been a while since I've seen the first season of Cosmos (about six years). Oh how time flies. I was so impressed by it, that I asked Neil DeGrasse Tyson himself about whether or not they'd have a season two when I met him in 2014. You can read about that interaction HERE on my blog. Well, a lot of time has passed, and season two got completed a few years ago but got delayed due to an accusation levied at Mr. Tyson for sexual misconduct (Me Too everyone?). I'm not sure if anything ever came of that. What I am here to discuss is my excitement for Cosmos season two, even if it is appearing on the National Geographic Channel and not Fox (which is where the original aired).

I remember getting emotional watching Cosmos: A Personal Voyage. Back in the day it was one of the first television shows I loved as a kid. The messages that were telescoped into my brain were something like, "humanity is capable of being so much more than what it is." 2014's Cosmos: A Space Odyssey is a worthy successor to the kind of STEM education that we saw in Sagan's original. In the very least, it should get people who watch it to look around our world and understand how it works, rather than just say, "God, therefore done." Without trying to provoke Christians who visit my blog, I just want to say, I respect your devotion and your faith, but please try and understand that the cost of blind faith is really quite high.

So here are my hopes for the second season of the series: two narrators (NDT and perhaps a woman?) That would be great for diversity, and NDT can sometimes get into a bit of melodrama. A second host may pull some of that back from the edge. I'd like better animations or live recreations. And I'd like fewer recaps following commercial breaks.

Anyone else planning on watching Cosmos: Possible Worlds?
Posted by Michael Offutt, Phantom Reader at 6:30 AM