Hikikomori is a Japanese term that means reclusive but it also describes adult children who have become parasites slowly killing off their parents. 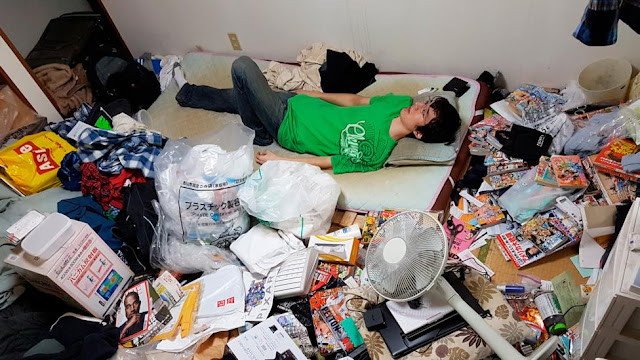 There's a strange worldwide phenomenon that's happening in developed countries. Coddled children are forcing the extension of their childhood through, essentially, what I would call "emotional blackmail." They are living with their parents (or parent in many cases) through their twenties, through their thirties, through their forties, and basically into their fifties until the parent keels over and dies (they worked themselves to death or spent all of their retirement money on their children and live in miserable conditions trying to scrimp by).

At that point the offspring (who is a full blown parasite at that point), either tries to find a new host to exist upon or finds themselves writing the finale of a personal life story that does not have a happy ending. Take your pick from homelessness to addictions of every kind to severe mental illness brought upon by the mind-bending fear of trying to exist without the benefit of a slave (a parent in most cases) to take care of their every need. How did we get here as a society? Maybe it began with parents who felt pain at saying "no" to their kids, and a revolution in parenting where children were made the most important fragile things (blessings) in the household. Couple this gentle hand with a real world that has no fucks to give about anyone (I hold the opinion that life even in America is incredibly brutal and many don't want to admit it) and is in many ways, merciless, and it was a disaster just waiting to happen. And now, it has.

Hikikomori is a Japanese word, and I feel like the Japanese having an actual name for the phenomenon are at least aware of the truth, even if it is an uncomfortable one. In Japan, "parasite" adult children are a national scourge. As high as 20% of people above the age of 60 must help support their children and grandchildren, but the figure is probably much higher because most people prefer not to talk about it. I've read story after story of a parent who is aged 70 beginning a day at 4 a.m., doing laundry, making breakfast for everyone, then leaving for a part-time job at a factory because her earnings are a necessary supplement to the family income. Meanwhile, they have a 52 year old hikikomori who just stays in the room all day long and plays video games and socializes on the internet. These "adult parasite children" retreat from society and into a world where they can forever be a child.

Many of the stories I've read talk about these "52 year old" parasites as having lived a pretty decent life. And when I say that, I mean they spent their youth living a life that was full of partying, games, socializing, art, learning this and that but only when they wanted to, flitting about with casual sex partners, and just being carefree. Decade after decade passed, with them always thinking that maybe they'd find "the one" or they'd settle down after they dated a few hundred more people. And "the one" is someone that would allow them to live their lifestyle, i.e., pay for it, but whom would never cramp their style. Never demand that they be monogamous or that they commit to any kind of actual restrained behavior. No...those things would be considered "psychological abuse" and not make a person a "fit" partner. So yeah...they lived passing the years thinking that something would come along that would be just right because...after all...there is a certain narcissism especially among the physically pretty that makes them believe, "I am the prize." But here's the thing: they actually weren't and never were. The parents knew this from the very beginning because they were raised in a different era. But in today's world I too frequently come across young people who believe exactly this: that they are the prize to be won.

Hikikomori is a scary thing to wrap one's brain around. The solution to "Hikikomori" seems to be a systemic change to the political and economic framework of developed countries away from capitalism and onto socialism. Providing things like food, shelter, medicine, and every challenge that capitalism expects a person to pay for through work. Because work is unpleasant, is traumatizing, takes away from socializing, and crushes self-worth due to the fact that you have to obey someone else (and smile while you are being disciplined if you come up short)...many of the "hikikomori" are unsuited for it. So society can lower the difficulty of just existing by providing everything, and then the hikikomori will be okay and can play video games or do art or listen to poetry (I guess) and look up at the stars and attend free concerts.

You may wonder why I think this is scary? It's because I wonder if a change ever does happen, who is going to pay for it? I certainly don't want to. I don't want to be that 70-year-old man getting up at 4 a.m. to go to a factory to earn money for a deadbeat adult that doesn't want to work. So yeah, it's frightening. And it hits especially hard, because I am friends with "hikikomori" here in America. We just don't call them that, and I finally realized just before writing this post, that this is exactly who these "friends" are.

People and their kids, man. I used to want a family, but now I'm so glad that I never had kids. I also wonder how my father was able to raise both my brother and myself with such a tremendous (and unusual) work ethic. He was a task master for sure, and we had to work on the farm all the time (I was 18 before I finally escaped the farm because I found work in town). Maybe that was the key...all those long days spent in the fields doing back-breaking work in ditches and moving pipe and harvesting. We would spend days from sunrise to sunset just making enormous hay stacks and slinging those things all day long. They were kind of fun to climb, though.  It was such hard work, and I can't imagine any of the kids I see today being able to do any of it.

We've all heard the saying, "Spare the rod, spoil the child," right? Well an entire generation of baby boomers on down through millennial's are doing/ did just that and now...all of those chickens are coming home to roost. I've said it before, and I'll say it again: "Life is endlessly fascinating to me."

Happy Monday.
Posted by Michael Offutt, Phantom Reader at 12:17 AM

Email ThisBlogThis!Share to TwitterShare to FacebookShare to Pinterest
Labels: Hikikomori, Hikikomori is a Japanese term that means reclusive but it also describes adult children who have become parasites slowly killing off their parents, Parasite children