The Dungeons and Dragons cartoon from the 1980's got a live-action conclusion in a car commercial filmed in Brazil. 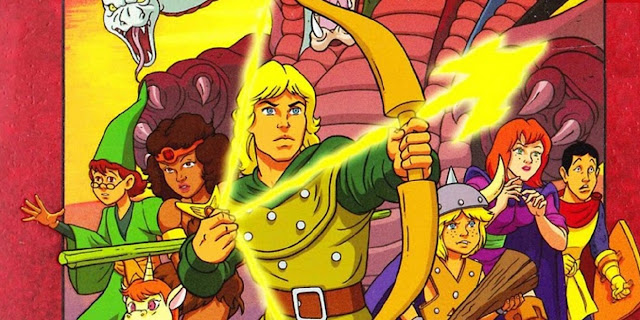 Back in the 1980's, I was a kid that liked getting up for Saturday morning cartoons (a few of you may remember these). I watched shows like "Thundarr the Barbarian", "Space Ghost," and the "Dungeons and Dragons" cartoons. There are some 27 episodes of the D&D cartoon, and the plot was very simple: kids at an amusement park got on a defective ride and got transported through a portal into the fantasy realm of Dungeons and Dragons. Here in this fantasy world, all evil was represented by a character named "Venger," who seemed to be in an eternal struggle with a five-headed dragon who went by the name of Tiamat. Most of this stuff is pulled from the various source materials of Dungeons & Dragons. However, there really wasn't a consistent audience for the cartoon, and it got canceled before the kids could find their way back home. So as far as anyone knows, they were stuck in this alternate fantasy universe for the rest of their lives.

Well, I guess that even decades later, the cartoon is still immensely popular in Brazil of all places (and the characters are very well known). I'm not sure why, but it just is. It does make me wonder if Brazilians play the actual roleplaying game enmasse, but I'll probably never know the answer to that. The popularity of the 1980's show is so big that there's a car commercial featuring the characters from the cartoon, and it shows how they get back to Earth. It's a live-action commercial, and it's in Portuguese (the native language of Brazil), and for what it's worth, I thought it looked kind of expensive with some pretty impressive special effects. You see Tiamat (the five-headed dragon), Venger, and Dungeon Master all show up (the last one in the getaway car that sends these five kids all back home). The actors playing the parts of the kids are good stand-ins for the actual cartoon characters.

Anyway, I'll link the video below. If you have the time (and remember this cartoon), it's honestly worth a watch. Also, you can find the 27 complete episodes of all three seasons streaming on YouTube (and you don't even need YouTube Red to watch them).
Posted by Michael Offutt, Phantom Reader at 12:03 AM