Today I'm thinking about exploitation and I'm wondering why there is so much of it in the world today. 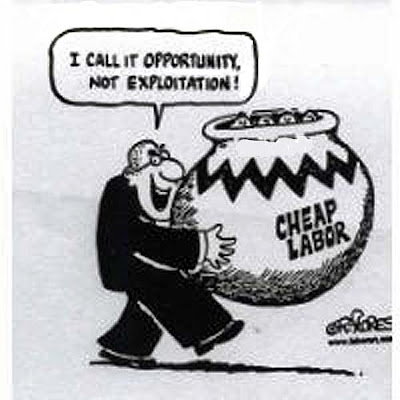 As I've gotten more aware of how the world works, I've noticed that a lot of life seems to be comprised of people who are looking for others to do unpaid work for them or to just flat out support their lifestyle of fun and play. It's a fascinating thing to observe, and I don't really have strong feelings about it either negative or positive. It just is, and I'm aware of it. Now, I'm not going to call this "unpaid work" by the term "slavery," but some resemblances to the images that particular term conjures into the mind do exist.

For example, I know people who are hyper-sexual and long for a devoted partner who will go to work 40-hours a week to pay for all the bills they rack up going on lunch dates, seeing doctors for various things, playing board games, and entertaining multiple guys and gals in that oh so special way (glamorized somewhat under the term "polyamory.") I know people who take on partners and then down the road, expect these partners to pick up more and more of the slack of caring for disabled individuals. And I know disabled individuals who really want a partner for doing all of the domestic chores and then some free sex here and there. I know people who "borrow money" with no intention to pay it back (another way to manipulate someone into doing something for them for free).

I know of organizations who couch unpaid work as evangelical volunteerism, or that use a religious calling as a thinly disguised way to make someone do a lot of unpaid duties. I know unpaid interns working for corporations. I know some former prisoners who tell me stories of work they were forced to endure while behind bars, which was essentially "unpaid." I know people who always have "their hand out," and it's because they want someone else to do the work they don't want to do (for free). I know people who feign helplessness to try and get free work out of someone else. And I know people who use emotional blackmail to enlist volunteers for lots of work (caregiving for an elderly parent comes to mind).

Becoming aware of this "fact" of living in the 21st century has become essential to my well-being and self care. I've actually found it "empowering," because I've learned that there is a never-ending pit of need out there, and that saying "Yes" to everything is dangerous to a person's health. If you do, you risk spending the rest of your days doing unpaid work for someone else, which can lead to bitterness, rage, and resentment (and other issues). And believe me, there is a never-ending supply of people who want you to work for them for free. Some will even be so ungrateful that they will criticize the work you've done for them for free.

I have been careful in the past few years to avoid any opportunities where I feel someone or something might try to exploit me. And I must say, it's had a souring effect on my disposition regarding this particular word. People do a lot of things in the name of "love" whether or not they are actually feeling that emotion at all. Sometimes, maybe all it takes is someone mouthing "I love you" and there is no meaning behind it.

"Love" in my book is supposed to be Shakespearean. It's when two people who have great passion and respect for one another, come together and become greater than they are apart. But what I've been witness to are people who are afraid of living alone just taking anyone to cause the pain of aging to go away, or people see another person as a meal ticket and think "why not?" Or people who choose a partner because it allows them to climb higher in whatever social circle in which they reside.  It all seems to fly in the face of my heart, which is that of a true romantic. I suppose I should add to the stack of "the people I know" a nice helping of psychopaths. Yes, I know a few people who I think are psychopaths, and by the very definition of that word, they could not possibly know what love is. Yet...these people end up in marriages...and they say, "I love you" to their partner with as much emotion as a fish. "Whatever," I think to myself. "You do you" and all that, right? But it does leave me wondering why this happens.

I wonder why there is so much exploitation in the world. I also wonder why people fall victim to it every day. I do know that things are changing. Cheap labor is drying up, and I think that's a good thing. But I expect there to be a tipping point...that there will be violent pushback from the modern day "slave owners" who suddenly will be in danger of paupering themselves to get the help they need. There will be lazy people everywhere who suddenly will need to do the work themselves because they no longer have someone to boss around for free. Organizations may need to cut their bottom line to start paying unpaid workers or risk being destroyed. I honestly can't wait to see this happen, and I hope it happens within my lifetime. I love to witness a good wake-up call as much as anyone, and I can't wait until the "entitled" in our society come face to face with the fact that they may have to scrub their own toilet.

Posted by Michael Offutt, Phantom Reader at 12:21 AM

Email ThisBlogThis!Share to TwitterShare to FacebookShare to Pinterest
Labels: exploitation, Love, slavery, Slavewear, Today I'm thinking about exploitation and I'm wondering where there is so much of it