This bee is huge. 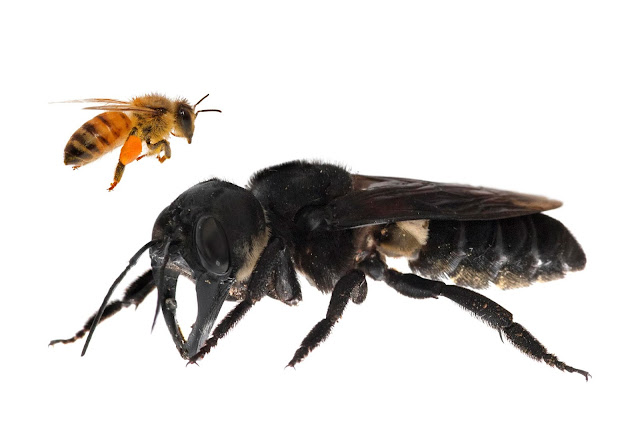 I've gotten stung by bees quite a bit in my life. My dad used to keep bees, because he was a farmer, and he liked the insects to be around to pollinate his crops. As a result we always had honey. Sometimes it was blue in color and tasted really exotic. The color of the honey is dependent on what flowers are used to make the honey (a lot of people don't know that).

The Wallace Bee is a rare bee I heard about on the way to work on Thursday. Scientists (at first) didn't know it actually existed, but they'd heard rumors. Well they tracked one specimen down in Indonesia and above is a picture that contrasts it with a regular honeybee.

The thing is huge. It's like the kaiju of bees, having somehow survived the prehistoric era to make it into our polluted, modern world. It's also apparently peaceful, having no stinger, and those jaws are basically like small salad tongs which it uses to carry stuff back to its nest.

It's nice to have some good news now and then, especially having just learned that we are only five generations from the apocalypse.
Posted by Michael Offutt, Phantom Reader at 12:42 AM

Email ThisBlogThis!Share to TwitterShare to FacebookShare to Pinterest
Labels: It's Science, This bee is huge, Wallace bee