Hog lagoons are the most disgusting business practice I have ever seen. 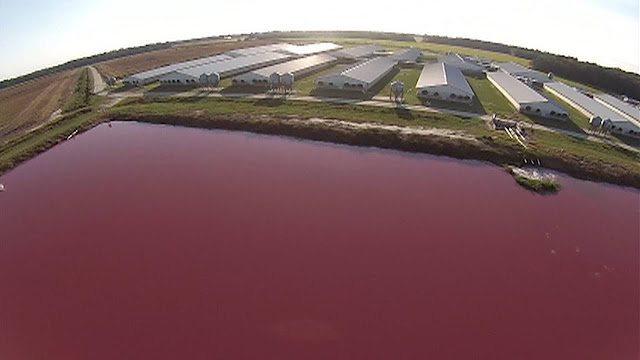 News agencies all over the place are reporting on hog lagoons being drained by hurricane Florence. Despite having the name "lagoon" attached to it, which conjures up images of tropical paradise (at least in my mind), these things are anything but that. Hog lagoons (if you don't know) are huge open sewers...they are pits the size of four football fields...and I guess there are thousands of them in North Carolina. Huge pig farms channel the waste product of thousands if not millions of hogs through pipes in the floors of these enormous warehouses and into these cesspools which must stink like nothing on earth.

NPR reported that the waste from these "lagoons" is now contaminating everything because its gotten into the river and groundwater. This stuff is so toxic, it kills all the fish in rivers and streams every time they overflow. Imagine returning to a home where your very insulation and drywall was soaked in pig urine and feces. It defies belief that this is happening because of something that's obviously legal. But regulation on huge "job creators" like these pig farms requiring them to install sewage processing plants is probably "bad for business." I can just imagine the super rich pig farmer who owns it all looking at his empty "lagoon" and smiling, "Well ain't that just special! It dun git cleaned up all by itself, and now I dun 'ave to worry 'bout it." Meanwhile being completely oblivious to the thousands of people who may be literally forced to wade through the aftermath of their bad judgement and cost-effective decision-making.

This is hands-down the most disgusting business practice I have ever seen.
Posted by Michael Offutt, Phantom Reader at 7:55 AM

Email ThisBlogThis!Share to TwitterShare to FacebookShare to Pinterest
Labels: hog lagoons, Hog lagoons are the most disgusting business practice I have ever seen