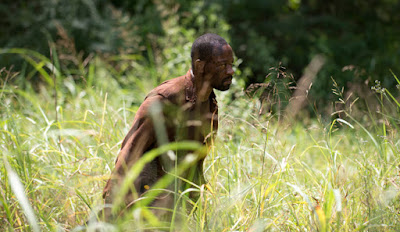 There are spoilers in this episode analysis :). You have been warned.

Last night, The Walking Dead treated us to a special 90-minute episode that was all about Morgan. At first, I was irritated that it looked like there would be nothing on the developments of last week. But once I settled into the episode called "Here's Not Here," the actor John Carroll Lynch (who played Eastman) gave an astounding performance as the cheesemaker that gave Morgan a reason to live.

Reflecting on the episode now that it's over, I realize that this was a really strong story. I loved the way Gimple decided to explore who Morgan is and why he seems to think now (of all times) that all life is precious. And then there's the quote from Eastman when he tells Morgan (as he's dying) that he "could stay" in the cabin but he hopes that Morgan doesn't. Life is about people, and he encourages Morgan to seek out others so that he won't be alone.

It's too bad really that "the Wolf" Morgan was relating his tale to in the jail there in Alexandria couldn't get the message. Despite how touching the tale of Morgan's redemption was, the surviving prisoner of the wolf invasion promised to continue to kill just like the psychopath that Eastman starved to death in his cabin.

Also I love the subtle answers we all got in this episode. There was the chocolate candies that we saw last year when Morgan laid them on the altar at the church just outside Terminus. Well now we know where he got them from. There was the answer as to why Eastman had a jail in his cabin. We were shown how Morgan learned aikido and how to use a staff so effectively. I just hope Morgan eventually finds a way to "pay it forward" so to speak and finally find peace.
Posted by Michael Offutt, Phantom Reader at 12:03 AM