There will be spoilers in this post. Please go away if this bothers you.

So I think that AMC is borrowing a page from HBO's mega-popular series "Game of Thrones." Even though Game of Thrones still doesn't come back for almost half a year, photos have surfaced online from the upcoming season and Jon Snow is in a lot of them, dressed in Stark armor, and he's leading an army. Speculators from super bloggers known as "The Watchers on the Wall" speculate that he (of course) gets resurrected by Melisandre and subsequently isn't a part of the Night's Watch anymore because his oath stands fulfilled. But that doesn't mean that HBO can't pump up ratings by killing off a beloved character and leaving fans around the world to speculate on his fate.

Well the same thing happened with Glenn in The Walking Dead. Only in this case, it's a set photo released by AMC during the late summer when Glenn was photographed in a group with Jesus (a major character from the comic) who hasn't been introduced yet. Here's a copy of said photo below. 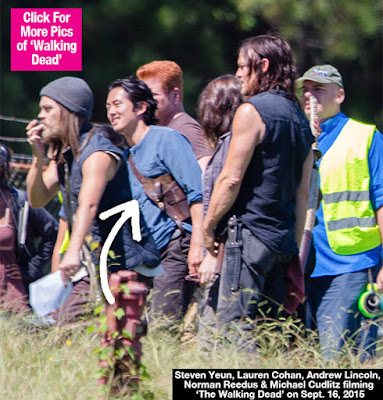 Jesus in the comic books is a badass, able to escape handcuffs, do karate moves, and wield all kinds of martial weapons. He's also a nice guy, and he approaches the people in Alexandria to form an alliance of sorts between the community they have and the one Jesus is originally from (which happens to be much bigger). Which pretty much sets up that Negan will be introduced in the season finale sometime next year. Negan is the most brutal of The Walking Dead villains to date, and he's actually the one that kills Glenn as an example to Rick (who opposes him). I "suspect" that AMC is probably going to adhere somewhat close to this although they might substitute Daryl for Glenn. If that's the case, then there will probably be riots in the streets.

Anyway, since this photo got brought to my attention, I thought I'd let all of you know that I've changed my mind on Glenn's fate. He's 100% alive and AMC is trolling all of us hard because it's the kind of thing that brings in the advertisers. And that's just the way it is.
Posted by Michael Offutt, Phantom Reader at 7:00 AM

Email ThisBlogThis!Share to TwitterShare to FacebookShare to Pinterest
Labels: AMC is trolling the whole world with Glenn's death on The Walking Dead, I've changed my mind about Glenn in The Walking Dead and I now think he's 100% alive