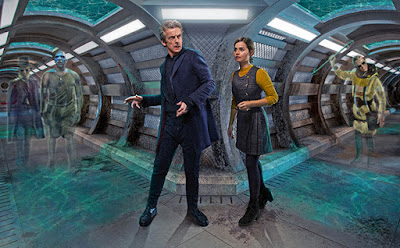 In the third episode of Doctor Who airing just this weekend on BBC America entitled "Under the Lake," the Doctor comes face-to-face with ghosts. Now, I'm not an expert on Doctor Who, but from what I've gathered in the episodes that I have watched the Doctor does not believe in ghosts. Every time they've appeared before in the past, there has always been some explanation. "Aliens" is one of my "go to" answers, but essentially..."things that behave like ghosts" have always been explained away as being something else.

In "Under the Lake" it looks like we're getting genuine disembodied spirits, albeit, those that are being used by an alien life force to form some kind of a "soul transmitter." The signal gets stronger as people die because their souls are harvested for the alien broadcast. The sinister implications of such technology lead to at least one question: if a transmitter is designed to broadcast coordinates into outer space through using human souls, how can this (at all) be good for humanity? Naturally, the doctor is the one that comes up with the solution, but I have to wait until next week to see how the stunning cliffhanger resolves itself.

Yet, this brings me to a small point I want to make: I think Doctor Who is at its best when an isolated group of people encounter something weird and even horrifying and something that they cannot explain. Into this scenario the Doctor inexplicably appears and helps them suss out what's really going on and then provides solutions.

The history of Doctor Who is replete with examples of this kind of plotting: the weeping angels are one such example. There was also the artificial flesh episode that struck me as particularly memorable. Maybe its something similar to how George R.R. Martin sees the concept of evil: that being there really isn't "evil" per se. Rather we perceive "evil" because it goes against our self interest. In these Doctor Who episodes in which people encounter something horrifying, there is always some twist...some reason for the creatures to be doing what they're doing. It could be as simple as survival, but the reveal always has something to do with understanding that which previously was a mystery. And once the understanding happens, the monster ceases to be so scary.
Posted by Michael Offutt, Phantom Reader at 12:16 AM

Email ThisBlogThis!Share to TwitterShare to FacebookShare to Pinterest
Labels: Doctor Who, Doctor Who is at its best when an isolated group of people encounter something that's beyond their pay grade and the doctor swoops in to save them