Is the secret brother that Iris just learned about on The Flash named Wally by chance? If that's true is the CW doing Crisis on the Infinite Earths? 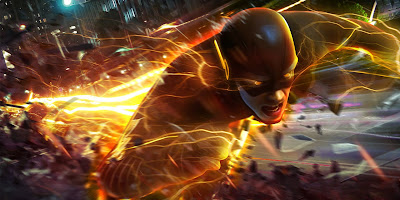 Look...the CW has just been knocking it out of the park with "The Flash" and "Arrow" this fall, and last night's episode entitled "The Fury of Firestorm" was no different. The insertion of heroes and villains from Earth 2 is just the beginning of what I must assume is a steady build toward Crisis on the Infinite Earths. If they can pull off Crisis at some point in the future, I'm going to go bonkers because it's even more ambitious than The Avengers. However, it also means that Barry Allen dies (if they follow the plot in the comic book drawn by George Perez), allowing Wally West to become "The Flash" infused with all of the powers of the Speed Force.

Up until now, there hasn't been a "Wally" West. But I don't think it's much of a stretch to think that the CW wants to at least introduce him. I mean, Iris's last name was always "West" and so was Joe's (naturally). And last week, they introduced "Francine" who was Iris' deadbeat former addict mother come to Central City to get to know her kid again. This week we found out that Francine was in town because she has a terminal disease. But because Iris is an investigative reporter, she discovered a secret that Francine had kept from her and Joe: the existence of a brother that she's never met. Iris asked Francine, "Do I have a brother?" but the emotions were coming too fast and too strong for Francine to answer before Iris walked out. What I wanted to know was, "Is his name Wally?"

Wally West is going to be the third Flash (the first was Jay Garrick and the second was Barry Allen--please correct me if I'm wrong comic book nerds).

1) I do like that it's Iris this time that is keeping "the secret" from Barry and Joe. It's a good "turn of the table."

2) It also seems like a very natural way to introduce someone (Wally) considering they've never talked about him at all. Usually shows are just sloppy and introduce someone as a "cousin" and just expect the audience to go along with it.

3) The C.G.I. for the huge man shark guy at the end was awesome.

4) The new Harrison Wells looks like he may be a good guy. That will be so weird because he looks just like the old Harrison Wells who is responsible for killing Barry's mom. How will Barry ever get past the way the guy looks to work with him on anything?
Posted by Michael Offutt, Phantom Reader at 7:52 AM

Email ThisBlogThis!Share to TwitterShare to FacebookShare to Pinterest
Labels: Crisis on the Inifinite Earths, Is the secret brother that Iris just learned about on The Flash named wally by chance, the Flash, Wally West