I've overcome the insecurity of non-conformity and found myself as a writer. How about you?

One of my favorite things to do is to read The New Yorker. In a recent exchange with fellow author Pat Dilloway, we discussed how slow I am at writing. Inevitably, unflattering comparisons to the worst traits of famous authors came up. Think of the exchange as similar to one where Cliven Bundy, the Nevada Rancher with his mooching welfare cows, is being compared to America's "Founding Fathers" in mockery and realizing that the things Bundy DOES HAVE in common with them are the things for which we are ashamed (slavery). Culling my memory of New Yorker articles, I came across this one: a profile written in 2011 that described the nutty passion of George R.R. martin's fans. They mock him on web forums for not writing faster, they keep track of every word to the point that GRRM has become paranoid over mistakes, and inevitably they all say he'll be dead before he finishes. 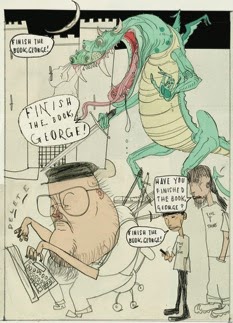 "My fans point them out to me," George said to the magazine. "I have a horse that changes sex between books. He was a mare in one book and a stallion in the next, or something like that. People are analyzing every goddamn line in these books, and if I make a mistake they're going to nail me on it."

I think the phenomenon that's happening to George is unfortunate despite the fact that I'm one of the people who wants George R.R. Martin to write faster. And here's why: as writers we have to know (or at least recognize) that our profession is filled with the zombied remains of aspirants who shamble about with rejection letters pinned to their foreheads. But as readers, many of us can tell when an author didn't enjoy writing something. It infuses the pages of a book the same as a wrong ingredient makes a soup taste funny. Take The Hunger Games as an example. The writer clearly was forced to include the romance, and it shows because the romance doesn't feel right. To state this in a simpler way, I'm talking about having passion when you write and in the absence of it, I'm condoning the absence of writing anything. My idea is a rejection of the one that insists you must compose a thousand words a day, or even raising a "metaphoric" middle finger to anyone that insists "schedule-keeping" is the only "true" sign of a serious author (implicating by the inclusion of the word "serious" that by not doing so you are just a hobbyist).

I guess that makes me a black sheep in the meadow. But here's the thing: I've learned not to care.

I keep no illusions that the stuff I write is not great literature. It rests firmly in corners of the internet where certain people googling naughty pictures and naughty stories might stumble across it. Gary Shteyngart who reviews books for the New York Times will never blurb any of my novels. Marion Ettlinger will never photograph me for a book jacket. I will never have a cover designed by Hugo Award Winning science fiction artist Michael Whelan. I've had my share of critics who throw my "free" work up there with what they consider "great" and in the comparison find them lacking. Whatever. I write novels meant to entertain me and I just happen to publish them. So people that think like me are going to be entertained. People that don't think like me will probably be offended and leave a scolding review behind. Part of me blames the MFA's for this.

Writing as a profession is awash with MFA snobs. Yet, I also sympathize with the tired old English professor. They are either called on the carpet for being too elite or for allowing students who can't write a complete sentence to graduate. It's a tough job, but the MFA programs should be used to criticism. So I'm going to offer up mine. What I'm saying about them is deserving because they head the dreaded "writing workshop." Here's what I think of writing workshops: they are there for participants to have their work publicly flogged, and I guess someone at some point decided this is a good thing and sold it to all the rest of us. "Stilted dialogue, flat characters, muscular prose" and any number of other criticisms come pouring out shortly before your pages are offered to a goat to eat.

Then there's the literary agents. To be clear, I don't have one, but I know about them. I'm also not disparaging any of my fellow writers who have agents. You deserve your success, so don't take what I say personally. What I know of them is just the impression that I've been left with in dealing with them. In person, they are fast talkers usually speaking before a crowd as a special guest. They all say the same thing: writers need a distinctive voice, stuff needs to happen, plot is key, this is in and the other is out, etc. Far be it for them to speak with the legendary Steve Jobs who said, "You can't just ask customers what they want and then try to give that to them. By the time you get it built, they'll want something new." I love that quote. And just so you know, I quote Steve Jobs here because he was a titan of business, and not thinking that writing is a business is a lie.

But here's the point of my entire post: each writer enters the craft with a strength. For some it is humor, for others it is world-building, and for yet another crowd it might be beautiful sentences. I know I find my strength in writing when I want to write, when I have passion for writing, and when I have something to say. This turtle moves at his own pace, and I have the luxury of not having fame. Yes, you heard me right. I'm not famous at all, and I think this in many ways is a fantastic benefit. The few hundred people that have read my stuff are not breathing down my neck and making fun of me online for being slow because I like to sit on the couch and watch tv and sleep more than eight hours a night. I've overcome the insecurity of non-conformity and found myself as a writer. How about you?

To conform or not to conform? Either way, I look forward to reading your comments.

This post is part of the Insecure Writer's Support Group started by Alex J. Cavanaugh.
Posted by Michael Offutt, Phantom Reader at 4:41 AM

Email ThisBlogThis!Share to TwitterShare to FacebookShare to Pinterest
Labels: I've overcome the insecurity of non-conformity and found myself as a writer, Insecure Writers Support Group