Summers are getting really hot, and I'm not talking about six-pac abs and string bikini hot (although I guess I wouldn't mind being on the beach to see at least some of that). Just a year ago, we had the hottest month on record. Ever. And everyone from scientists who study climate change to insurance adjusters paying out claims is asking, "Is this normal?" Now, just to be clear, I'm not trying to start a political debate and ask what side of the climate change argument you are on. However, I do want to tell you about one super crazy idea that just may be a possibility in the near future (it's super scary when you consider it could create flying sharks!)

In a paper published in the Philosophical Transactions of the Royal Society, physicist Rob Wood is proposing than an experiment be conducted on a small scale where marine stratocumulus clouds are seeded with a lot of tiny sea water particles. The effect they are looking for is to significantly enhance cloud droplet number concentration, and thereby cloud reflectivity and longevity. The result: a cooling effect.
Initially, the project would deploy sprayers like the one pictured above to ensure that enough salt water particulate can be blasted high enough into the sky. In turn, a plane equipped with sensors would monitor the physical and chemical characteristics of the particles and how they disperse. Cool, right? Well maybe not so much.

Here's my train of thought: sea water doesn't appear to be initially dangerous. However, when I bother to look deeper and start to think of their delivery system, and how it could possibly blast microscopic algae, bacteria, fungus, minerals...literally anything in ocean water...my imagination goes wild. Sure...the "reasonable" person in me says that this living stuff wouldn't survive the process.

BUT THE SCI-FI WRITER IN ME ASKS: WHAT HAPPENS TO THE SHARKS THAT GET SUCKED UP INTO THE MACHINE?  Cause the ocean totally has sharks in it and they nom nom nom on people ALL the time. 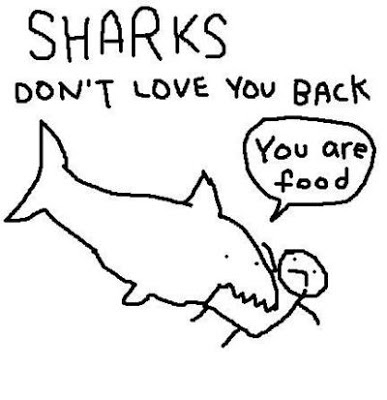 And I suddenly had this epiphany that "bold" font simply does not have the power to express but I shall give it the old college try: OMG..."SHARKNADO!"

Those brilliant guys at SyFy sooo saw this coming.... 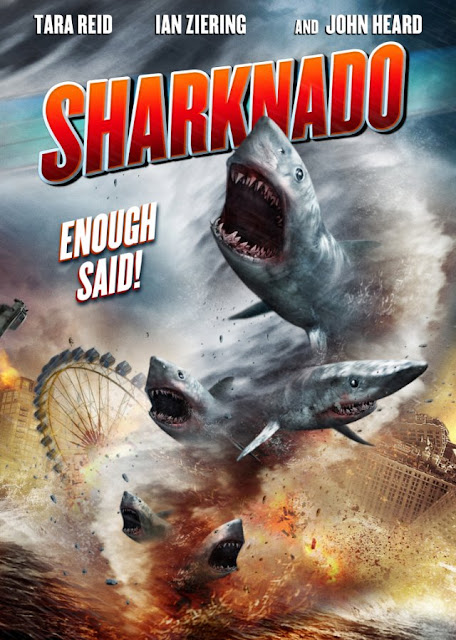 When a freak hurricane swamps Los Angeles, thousands of sharks terrorize the waterlogged populace. And when the high speed winds form tornadoes in the desert, nature's deadliest killer rules water, land, and air!

But guys, after having read my explanation of how the cloud seeding works can't you see that there are real world physics that could make the scenario in Sharknado for reals?

I know, it's terrifying right?

So let's go over the things you should do to protect yourself should a Sharknado happen for real in your home town:

1) Get yourself a suit of riot armor and don't go outside without it. Flying sharks don't like the taste of riot armor, and they will avoid eating you for someone who is plump and juicy (which describes most Americans). 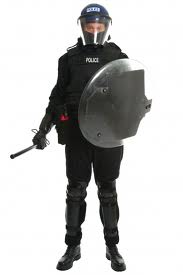 2) Don't eat at Long John Silvers. Sharks can smell fish on you and if you've been eating there, chances are, they will consume you out of revenge. I know this is a fact because there's a movie called "Jaws the Revenge!" So it's totally real.
3) Get a bigger gun. You know...something the NRA would approve of because flying sharks are dangerous.
4) Become a ninja. Ninjas can always beat sharks. Just look at the below picture as proof. And if you cannot become a ninja, then hire a ninja. I hear they work for food. You know you've got a successful one if you tell him where you live, and when you go home, all your stuff is gone. Ninjas are like that. They can be in and out like the wind.... 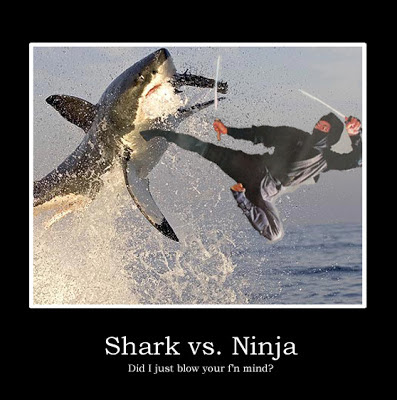 5) Dress up as Batman and buy a toy red lightsaber. Sharks are terrified of the Batman because of what happened the last time those two tangled: 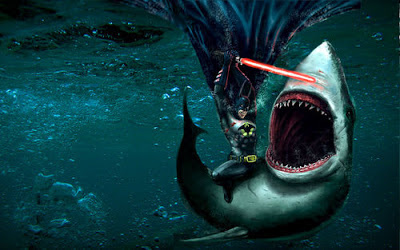 And there you have it folks. Whew. Be safe everyone and remember my five rules even if you can't remember ANYTHING else. Trust me, they shall serve you well.
Posted by Michael Offutt, Phantom Reader at 12:01 AM

Email ThisBlogThis!Share to TwitterShare to FacebookShare to Pinterest
Labels: Five ways to protect yourself from a Sharknado, Humor, Science Fiction News, Sharknado, SyFy, The real world physics that could make the scenario of SyFy's Sharknado a distinct possibility