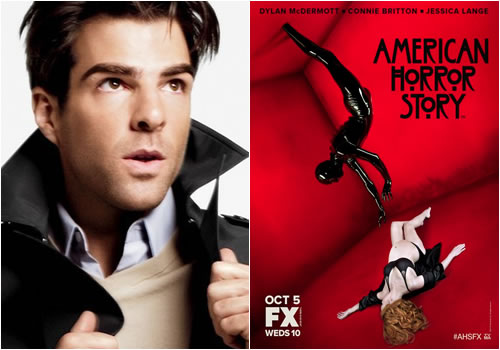 I have been watching American Horror Story, and I have to say, this is the most f'd up show that I have ever seen. But I'm hooked. And this isn't only because I'm a huge Zachary Quinto fan (and I'll watch just about anything that has Mr. Quinto in it). The show is completely unlike anything else on television.

Here's what we have in just the first five episodes (they are on Hulu for free if you want to watch them):

1) Mongoloid child that keeps breaking into the house and says, "You're all gonna die" and stuff like that. She's just really creepy. Her mother locks her in a closet filled with mirrors so that she only has herself to look at to remind her of how ugly she is.  Of course, the girl screams at the top of her lungs while the mother goes and has sex with a young man.

2) Ghost/demon in a black rubber suit that impregnates the lady of the house who thinks that she's having mind-blowing sex with her attractive psychiatrist husband.

3) Ghosts everywhere. You don't even know who's a ghost and who isn't. The teenage girl in the show falls in love with one and he's responsible for a terrible Columbine-like murder rampage in a local high school. Yet she's willing to give her virginity to the ghost on a romantic beach on Halloween night.

5) The next door neighbor played by Jessica Lange who gives a "twist" to the faded southern belle. She's a cougar, a psychopathic murderer, and delivers her lines with the charm and calm of a female Hannibal Lecter. When she brutally murders her husband and a girl he's screwing, you swear that her pulse barely goes above 60. Plus she puts ipecac into some muffins and has her mongoloid child spit in them and then takes them as a gift to the next door neighbor.

And it goes on and on and on. The writing in this show is amazing, riveting, and compelling. It's exactly the adult fare that I can really sink my teeth into. If you aren't watching it, I suggest that you do. It's plain awesome.
Posted by Michael Offutt, Phantom Reader at 1:38 AM