Umbrella Academy's greatest strength may just be its choice of music. 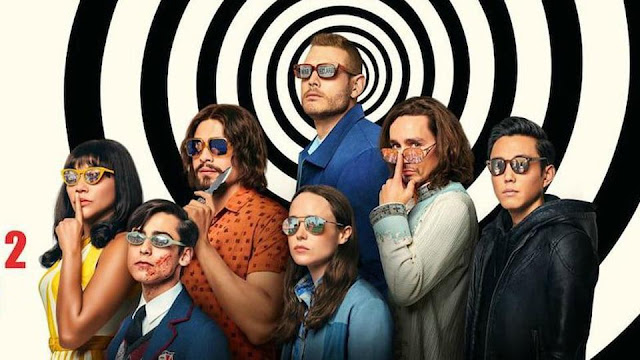 A lot of people like Umbrella Academy. I am one of them. I started watching the second season of it on Netflix this weekend, and it occurred to me that there are a lot of shows out there that fill this niche. And by "this niche," I'm saying comic book movies with real characters that have problems and issues and are very flawed and relatable. So why then is the Umbrella Academy even good? Well, there are several reasons that make it a standout.
It does have a nice budget and the C.G.I. that they do for the main cast is on par with things that I've seen come out of Hollywood. In particular, I thought the talking ape character was really well done. Additionally, Umbrella Academy takes a page from Snyder, who used big letters to spell out locations and timelines that were angled in ways to make them appear as part of the storytelling panel (I'm specifically thinking of the movie, Watchmen, here). This gives it a comfortable, almost nostalgic vibe of professionalism that I like.
However, this answer left me wanting, so I continued to think about Umbrella Academy. What I landed on as a viewer (as an answer to my own question) is the choice of music, which is very important to the show. Gerard Way of My Chemical Romance is the creator of the show, and presumably spends a lot of time on it since his band broke up (I'm still upset about this by the way).
My Chemical Romance is probably my favorite band that came out of the early 2000's. Their music was so good, and just had fantastic (great) lyrics and tone that (I think) is comparable to the early albums U2 put out in their career. The music of My Chemical Romance to this day feels surreal, personal, cathartic, kinetic, and it's just fun to listen to. Additionally, the story just gets the viewer into the good stuff right away. You don't have to figure out how someone got their powers. Instead, you are off and running with an apocalyptic plot and trying to figure out who is what and why should anyone care? Additionally, the characters are very strange, consisting of a gorilla man living on the moon and another man who talks to dead people (just to name a few).
Anyway, those are my thoughts. So anyone out there a fan of Umbrella Academy? If so, would you agree that the music in it seems to be carefully chosen and serves the narrative on the screen rather well?
Posted by Michael Offutt, Phantom Reader at 12:05 AM