This year Jaws turns 45 and I think it's become an allegory for modern life in the United States. 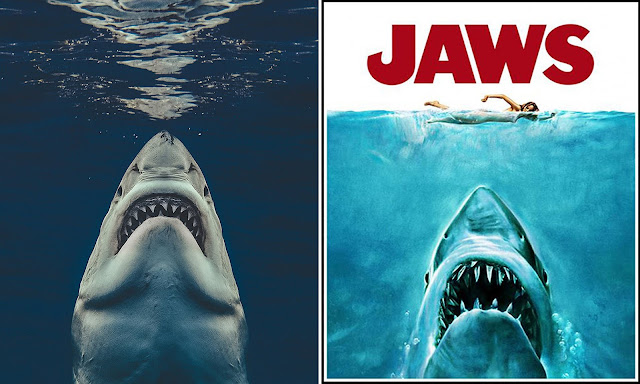 Jaws turns 45 this year, and I thought I'd bring up things that the story profoundly illustrates. They are unchanging and enduring with regard to the way humans treat each other.

The corrupt money-grubbing Mayor (Larry Vaughn) is every Republican in Congress, and he's President Trump in a nutshell. "Let's open the beach...we can still save July 4th!" "It's the economy that's important!" The parallels between Covid 19 endangering and killing people seems remarkably similar to the shark swimming around eating people. Another one of his quotes that I love is, "Martin, It's all psychological. You yell 'barracuda,' everybody says, 'Huh? What?' You yell 'Shark,' and we've got a panic on our hands on the Fourth of July." This is an acknowledgment of the power of gaslighting people, and it's happening every day with our current administration.

There's also the time when Sherriff Martin Brody says, "I can do anything, I'm the chief of police." It's a great line and clearly a joke. Martin's been drinking a lot, because he's incredibly frustrated and worried about his own family and the citizens who live on Amity Island. He feels the weight of his decisions and is troubled by the death of Alex Kintner, because he didn't have enough guts to close the beach. And he doesn't know if they actually caught the shark. When taken into 2020 context though, the quote takes on another level of meaning that they knew about even back then: that cops (when push comes to shove) basically feel like they are not accountable to anyone. To put it another way, society does not (often) visit consequences on law enforcement officers. It's as true in 1975 as it is in 2020 America.

Ignoring science experts--this was a thing in the movie and it's still a thing today. The mayor in the film prefers to use "cheap" solutions to try and get the shark. None of them work, but he gaslights everyone into believing that the beaches are safe. The science expert in the movie is named Hooper (played brilliantly by Richard Dreyfuss) and he knows that the shark is still out there. He even explains to the mayor very passionately that he pulled a tooth the size of a shot glass out of the bottom of Ben Gardner's fishing boat, but got spooked and dropped it. The mayor instantly seizes on this with, "So you don't have the tooth?" and then uses this lack of evidence to dismiss Hooper utterly and completely.

Jaws is a great story. But more than that, it has become (in the decades that followed its release), an allegory that reveals much about human behavior in modern America.
Posted by Michael Offutt, Phantom Reader at 7:55 AM

Email ThisBlogThis!Share to TwitterShare to FacebookShare to Pinterest
Labels: Is Jaws the only good shark story, Jaws, This year Jaws turns 45 and I think it's become an allegory for modern life in the United States