Dungeons and Dragons is making some big changes to make its game more inclusive and diverse. 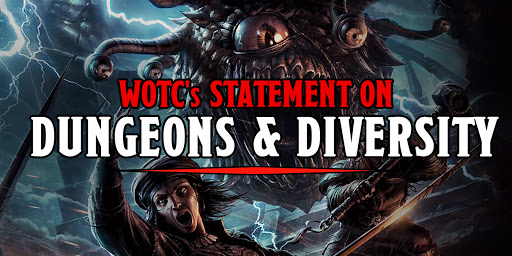 Dungeons & Dragons is a game I play, and it's also making some interesting changes in its current 5th edition roleplaying game to modernize it for today's world. In an announcement they made on Juneteenth, they hinted at no longer providing racial bonuses for people to pick certain races over others in making their characters. I never really thought of this as racism, but there you go. And then they're going to overhaul the Drow, which are a race of evil elves who have black skin. I've thought the Drow seemed problematic for a long time, and even suggested that people should never cosplay as a Drow because that could be construed as blackface. But sometimes you did see someone do it, and I don't think they were aware that the image might be offensive to some.

Another thing they are doing is overhauling monster races like orks and hobgoblins who typically have been depicted as having darker skin tones. I guess that is going to change, as well as their behavior. In other words, orks are not always evil, and there's going to be a move to make them more of a society that could actually exist. I know in the current D&D game I'm running for friends, I have a couple of goblins I've cast as sanitation workers and they smell like hot garbage. But after reading Wizard's post (Wizards of the Coast is the owner of the brand Dungeons & Dragons), I'm wondering if I'm not being diverse enough in my depiction of sanitation workers in this fictional world. Goblins just seemed easy to pick on. And there's a kind of "stereotype" built around exactly "what is a goblin?"

To be honest, these were always questions I had in my mind when I watched something like The Lord of the Rings, or read books with these kinds of monsters in them. Anyone who is a fan of The Lord of the Rings wonders how the orks in and around Mordor can survive. There's nothing to eat there. It's all rocks strewn over with ash and sulfurous fumes, etc. Basically, it's a real hellscape. Yet there are tens of thousands of these creatures just milling around, obviously finding water somewhere, though I don't think venturing out from behind the Black Gate to find food and water would necessarily support a society. Maybe Barad-Dur had mushroom farms underneath it or something like that.

And then they're going to take a hard look at the Vistani, which are a people in a famous Ravenloft module who have all of the gypsy stereotypes. I guess they will be consulting with (or already have consulted with) a cultural expert on gypsies so that they can get it right.

And there's another part of me that wonders if all the "woke"-ness goes too far with the fantasy genre. Look, I get it that WOTC needs to make money and survive as a business, so they have a vested interest in making fictional and fantasy worlds as diverse and inclusive as possible. But in figuring out that goblins or orks couldn't actually exist if they didn't farm and have children and attend P.T.A. meetings kind of takes all the magic out of the fantasy. I say that because the more and more detail we put into fictional worlds moves the slider toward the real world. In other words, if we keep sliding things toward "more realism" and answering questions like, "how exactly does this work" and "let's figure out everything"...well...what you end up with pretty much resembles our world. And at that point, why play a game? You could just live your life.

Anyway, it will be interesting to see how the makers of D&D thread the needle and make their game more inclusive. Good fantasy games tend to need bad guys, and when you remove things like orks and goblins and Drow from being good bad guys, it probably means that there will be some kind of "other monster" that is created with a made-up name which will be the new bad guy for a while. And if that's all people are doing (shifting the bad guy to something else), I suppose it may work in some ways. However, I'll always wonder if this new bad guy isn't the same thing as the old one, only with a different name (because using the old bad guy became problematic with regard to identity politics).
Posted by Michael Offutt, Phantom Reader at 12:25 AM