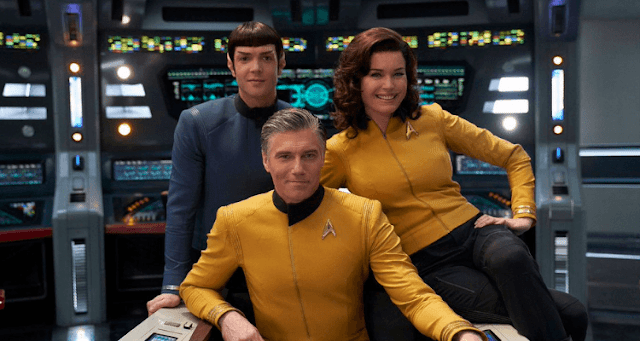 I read on Variety last week that Star Trek is launching a series helmed by Anson Mount's Pike from the second season of Discovery. It's called Strange New Worlds, mostly because Enterprise was taken. In the Variety article I read, the show runners are going to take Star Trek back to its roots and make an episodic series that focuses on a monster or problem of the week.

Anson Mount put in a spectacular performance as Pike in the second season of Discovery, and I was hoping something like this would come along. Star Trek has a wonderful universe to explore, and I'd love to see what they come up with regarding these alien worlds. With Discovery launching into the far far future for season 3 (and probably beyond to its ultimate end), Picard being pretty much in the near future a decade or so after Voyager and Deep Space Nine ended, and now this new series taking place in the pre-Kirk timeline, I feel like most of my Star Trek needs are going to be attended to in due order. In particular, I do hope that there's room to tell a few more Section 31 stories. Deep Space Nine did a really good job of showcasing how dangerous and strange Section 31 actually was, and then Discovery opened the lid on a universe ending plot from Section 31 that was, quite frankly, amazing television.

The only thing left that I really want is a Captain Georgiou as the Empress spinoff, because she steals every scene that she's ever featured in, and I love the character. Regarding the new Trek series, I wonder if they will have Anson Mount do an opening monologue... "Space...the final frontier...." That would be kind of fun.

I can't wait for the time when there's Star Trek all the time. It's coming folks, I can feel it.
Posted by Michael Offutt, Phantom Reader at 12:02 AM