Today I learned that J.K. Rowling and Richard K. Morgan are TERF's. Neat.

"TERF" is an acronym for transgender exclusionary radical feminist. These are people who believe that sex is binary and assigned at birth and that surgeries and/or inner identity have nothing to do with any of that. Here's the tweet that earned her this interesting acronym (which I had to look up by the way): 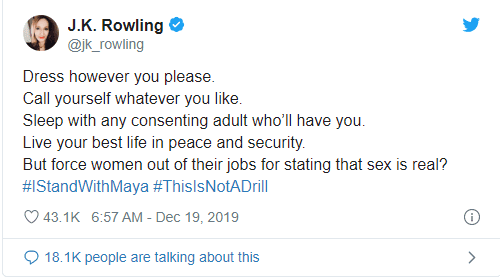 The "Maya" in the tweet refers to Maya Forstater, who tweeted such things as "men cannot change into women," and "it's unfair and unsafe for trans women to compete in women's sports."

Richard K. Morgan, the author of Netflix's Altered Carbon series had similar things to say, when he wrote the following:


“I also hold these truths to be self-evident – facts are stubborn things; human sex is binary, you are either born a man or a woman, and neither sex can change into the other. The much vaunted phrase “Trans women are women” or “trans men are men” is a semantic nonsense; it is quite simply objectively untrue.”

I am a little disappointed, but I've come to expect it from the modern era where we know a lot about the people whom we look up to. I enjoy reading Richard K. Morgan quite a bit, and I don't see myself not liking his writing because of his somewhat "tone deaf" response to transgenderism. I guess I am a little shocked because his stories lend themselves so well to transgender identity. The whole conceit of Altered Carbon is that a physical body is just a sleeve and consciousness can be downloaded into any sleeve effectively making a person immortal.

I guess the only thing I really can say to this is, "Neat." The word says nothing, only maybe it's a little better than a sigh in that it's an acknowledgement that I didn't ignore what was said. I guess I support a person's ability to express what they believe? I dunno. It's weird. We live in an age where strong opinions can just be shouted out into the online world, and I wonder if people who hold these strong opinions even realize that some of these things are hurtful to others who are really struggling. I guess the outrage machine burns on and on, and at the end of the day, the world is exactly how George R.R. Martin saw it in Game of Thrones. We all know nothing, just like Jon Snow, and there is no such thing as good or evil. Only shades of gray, entirely dependent on what you believe and what you fight for.
Posted by Michael Offutt, Phantom Reader at 12:15 AM