Star Trek Picard is walking the disappointing road that the Star Wars sequels followed by killing the happy ending. 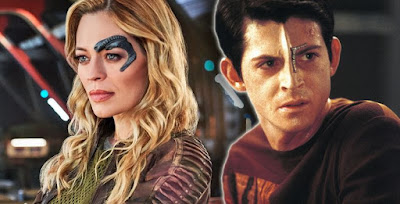 I'm a few episodes into Picard, the CBS All Access examination of what occurred after Picard's illustrious Starfleet career is over, and I'm beginning to think that what we have going on here is the same thing that seems to have happened with the continuation of the Star Wars movies. In other words, the happy ending didn't last and what was once good enough to be left alone has now been mined for visceral and emotional reaction to justify nasty changes in these beloved characters.

Case in point, the brutal killing of Icheb, who was a character I really liked in Star Trek: Voyager for about two seasons, was awful as soon as I realized who it was that was screaming while he was getting chopped up. I didn't need to see this, and I'm pretty angry with Star Trek not because of the gory death per se, but because it was Icheb. I liked Icheb a lot, and I know (because I'm a thinking adult who knows how stories work) that the director of this episode (it's Jonathan Frakes a.k.a. William Riker of Next Generation) called "Stardust City Rag" mined old content looking for ways to connect these present events to the past, stumbled upon Icheb, and was like, "I'm gonna kill off this character to motivate Seven of Nine."

It makes me shake my head in disgust.

Picard isn't Game of Thrones unless I missed a memo somewhere. Beloved characters do not need to be put on the chopping block in order to create visceral emotions for new stories. I honestly think that this is the laziest of storytelling...going for a character death in order to spur a major character onto a path that you want them to walk. There are a myriad of other ways that this could have been accomplished, maybe by devoting one episode (or several episodes) to a backstory following Seven of Nine's awareness of how the Federation has changed following the destruction of Mars, or following her own investigation into what exactly the Romulans are doing with that Borg cube.

It could be any number of things. My first guess as to what's going on with the Borg cube is that it's the one that was destroying Romulan colonies on the very edge of the Neutral Zone in the first season of Star Trek: The Next Generation. They never followed up on that, but it definitely had a "Borg foreshadowing feel" to it, as entire colonies had been scooped up and were missing. Maybe the Borg had a problem assimilating all of the Romulans...like there was something toxic or poisonous about Romulan genetics similar to what happened when the Borg attempted to assimilate Species 8472. All of the Romulans that are removed from the Borg ship (is the word "recovered" appropriate here?) seem to be crazy/insane...so there's obviously something medical (that's unexplained) going on here.

I think that the Borg decided to cut loose that ship and return to Borg space until Season 2 and the episode "Q Who," which introduced humans (and the Federation) to the Borg, which then was followed up in the season finale of Season Three "The Best of Both Worlds." And that's where that Borg ship that the Romulans are studying came from.

Anyway, I haven't been able to connect many of the dots in Picard, but killing Icheb seems cruel and unnecessary. There are plenty of things going on that are interesting enough to have brought in former beloved characters from Voyager, Next Generation, and even DS9 (if that happens at some point) without having to axe characters to give these people a reason to interact with the story. It seems gratuitous, and I don't like it.

At least Discovery is knocking it out of the ball park (in my opinion), by breaking new ground in tremendous thought-provoking ways.