So far in the MCU Captain Marvel pays no price for the use of her powers which cannot be countered in any way. 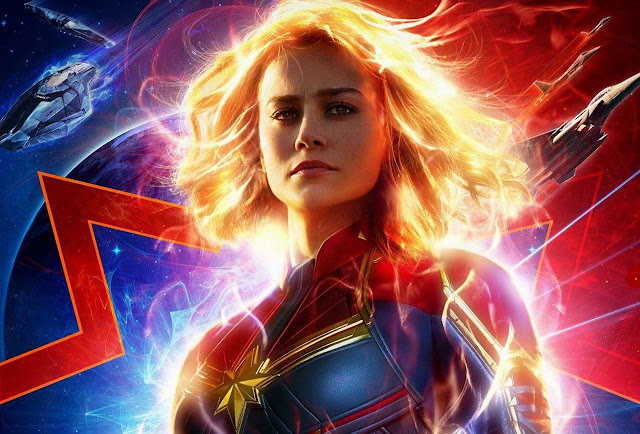 Like most of America, I went to see Captain Marvel this last weekend. I enjoyed it. I thought it was good (not great), and it accomplished what it set out to do: tell the origin story of the latest superhero. I literally knew nothing of Captain Marvel going into this movie aside from (at some point) Rogue steals a good deal of her powers and can fly around and possesses super strength. And she looks really cool in the trailers with the photonic energy flowing around her (and her eyes are blazing with power). Oh and the helmet she wears pushes her hair into a mohawk...that's kind of cool as well.

I guess when I look back at the film, I was a little underwhelmed by the photonic laser beams that she can shoot out of her hands because they just seem so straight forward and an easy solution to everything. Spoiler Alert: there is nothing that can counter them. They basically destroy everything, so there is that.

But that's both neat and not so neat. I mean...if all you have to do is blast something...and it goes away...then there really is no build-up, right? That's pretty much what Captain Marvel does the entire movie. One thing gets in her way and bam, it's gone. This includes multiple Kree spaceships at some point...and none of them (and their advanced weaponry) stand a chance. I imagine she wouldn't need the weird forge from a neutron star that we saw in Infinity War to melt the uru metal and create Thor's weapon...she could probably just use her light beams and melt anything that was needed (no matter how fantastic) and it would just make her hair glow and look all nice while she was doing it.

Based off what I saw in Captain Marvel, she could have just blasted Thanos in Infinity War and he'd be done mid-speech. Again, there seems to be no counter to her power. Or maybe there is one, and we just haven't seen it? But I think I'd hate that with a passion. And this brings into question the whole "suspension of disbelief" argument. It would be a painfully obvious plot device for Thanos to suddenly have some kind of foil for Captain Marvel's blast em laser beams. I'm not saying that this shouldn't be the case, but if nothing in the universe seems to be able to stand up to them prior to "X" event, why should "X" event even be a thing? It's the same problem I have with superman's powers, i.e., "Ha ha I'm invincible and can do anything...oh! Kryptonite! I'm powerless!" and yada yada yada.

I think I prefer superheroes who always have to struggle. Like their powers make them clearly superhuman, but their superhuman foes can easily keep them in check and there's this tug of war that happens in any combat between them because anything could happen. Hulk is super strong but can get knocked out by similarly strong things. Black Widow is a great fighter but ultimately a bullet can end her. Doctor Strange has all the magic stuff, but he's got to have the finesse to cast the spell and the stamina to withstand the price the magic use extolls upon him. Captain Marvel blasts things, none of the blasting drains her in any way, and nothing can counter the blasts (it either explodes or is destroyed). She feels very much like a deus ex machina...a thing that can just fix anything by just showing up. Her presence feels oddly out of balance with everything else.

Anyway, my guess is that Captain Marvel as a standalone movie, isn't a wide enough view of this character. I think when the next Avenger's movie hits in a month, we'll see that there are checks on Captain Marvel's powers, and that she's more in balance with the bad guy, Thanos. And by that, I mean she won't be able to just take him on herself and will need the other Avengers. I just didn't see it in this film. She could basically have done all the Avenging herself and wouldn't have needed anyone else.
Posted by Michael Offutt, Phantom Reader at 12:00 AM

Email ThisBlogThis!Share to TwitterShare to FacebookShare to Pinterest
Labels: Captain Marvel, So far in the MCU Captain Marvel pays no price for the use of her powers which cannot be countered in any way