I'm a little disappointed that Captain Marvel has an Achilles Heel. 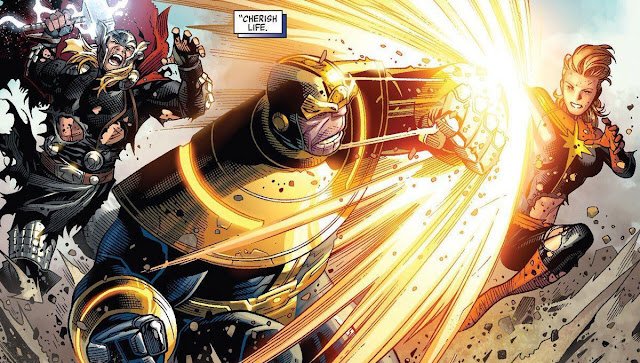 I wrote in an earlier post that there were no counters to Captain Marvel's powers in her movie. Well I learned from IGN recently that it's true, Captain Marvel appears to be unstoppable. However, in that same article, Kevin Feige assures us all that Carol Danvers will in fact have an "Achilles heel." So basically, she's just like Superman now. Why am I disappointed? I guess I was getting on the train boarded by George R.R. Martin who wrote:

"The movie is hugely entertaining. I look forward to seeing how the Marvel teams uses the captain in the forthcoming Avengers movie. Once she comes fully into her powers, she is far and away the most powerful character in the MCU. She could eat Iron Man for lunch and have Thor for dessert, with a side of Doctor Strange. Thanos is in trouble now."

Well, I guess Thanos is in trouble provided he doesn't exploit the afore-mentioned "Achilles Heel." But something tells me that this will be exactly what happens.

It all seems so "constructed," doesn't it? As if it were all carefully plotted...painstakingly so...and the fate of all these characters were left...god forbid...up to writers.

Oh geez...I think I just popped my own bubble of suspension of disbelief. Don't go there, kids, just don't. It's no fun to peek behind the curtain and see the Wizard of Oz for what he truly is.
Posted by Michael Offutt, Phantom Reader at 7:04 AM

Email ThisBlogThis!Share to TwitterShare to FacebookShare to Pinterest
Labels: Captain Marvel, I'm a little disappointed that Captain Marvel has an Achilles Heel