Is cosplaying as a Drow elf considered to be wearing blackface?

The Virginia governor recently had a photograph of him resurface from a college yearbook wherein he was wearing blackface. If you look at my post last Friday regarding support for wrong ideas, you might recognize that there was support for blackface (no matter how wrong it was) from people in the last 100 years. At present, there appears to be quite an erosion of support for blackface of any kind.

Saturday Night Live did a skit on blackface that I found interesting. A group of white people fielded questions at a black man who promised not to get mad for answering questions, but it did try his patience. The message (TL;DR): it never is okay to wear blackface and it never has been okay to wear it despite what era it was or is (going back in time). This statement affirms what I wrote on Friday which (in a nutshell) is this: "Support for something" and "wrongness" are completely unrelated. Ideas can be super wrong and have amazing support, and vice-versa...really amazing ideas can have no public support. What determines whether something has public support really does appear to be an arbitrary and unpredictable thing (in my mind). However, I will leave room to say that someone out there might have a better clue than me as to what people will support in the end.

That being said, I kind of wish I had been in that audience on SNL, because I would have asked if it was okay to cosplay as a Drow elf at a comic book convention. Allow me to explain just a wee bit.

Drow (or dark elves) are a race of beings from the Dungeons & Dragons fantasy role-playing game (and they are probably based upon something else in actual mythology, but I'm not going to investigate that in this post). With the exception of a character called Drizzt, they are (for the most part) evil, deriving their power from the Queen of the Spiders, who is a goddess called Lolth. She's also a demon that occupies three layers of the Abyss known affectionately as "The Demon Web Pits."

Drow organize themselves into powerful houses and they rule their chaotic evil society through extremely viscious and powerful matrons (Drow have a matriarchy and not a patriarchy). They live in underground cities which (with the aid of darkvision) are true wonders to behold. To keep one house from one-upping another house in their toxic civil government structure, they summon and control demons and set them loose on the city streets. Drow who are unable to deal with the demons (because they aren't strong enough) just perish. So needless to say, Drow society is very cutthroat and unforgiving. Their goddess, Lolth, appears to like it this way a lot.

Drow are also described as being inky black with white hair. And that's like "shoe polish" black. Do you see the problem here? I'll include a picture. 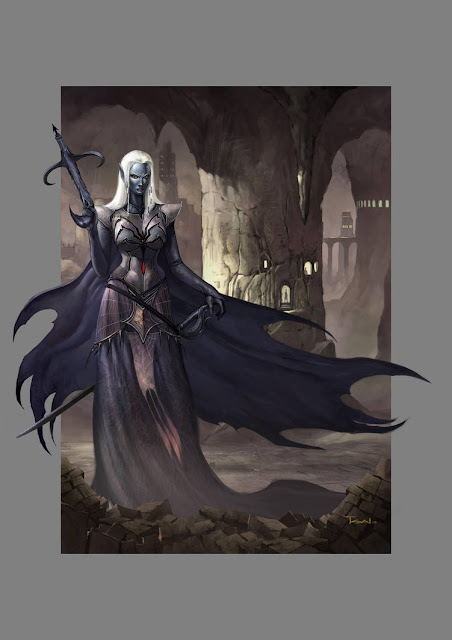 This is called "Drow of the Underdark," and it is a painting by the artist Francis001. It is cover art for a book from Wizards of the Coast (the maker of Dungeons & Dragons), and if you like, you can check out more artwork from this artist located HERE.

So here's the question: If someone wanted to cosplay as a drow elf as above, and it required them to darken their skin with shoe polish or some kind of makeup, would this be considered blackface? Is this now (and always has been) a "No No?"

Because it is a fantasy creature, I'm tempted to say, "This would be okay." After all, you've got the pointed ears, the clear as day need for a white shoulder-length wig, and then the costume which is clearly that of a fantasy race. But what I'm tempted to say might be "okay" others might be screaming mad about, which is probably why I shouldn't be the judge of things like this and would never consider myself "woke" as I have clear questions about "what is and is not crossing a line?"

As a caveat, I don't expect to arrive at a solution based on this post or the comments that follow. A lot of social justice has no central authority, and (because of this) there are varying stages of permission and outrage that seem to flow simultaneously from any given sample size (of a population). The course of action then seems to be more of a "let's just muddle through this without getting killed" kind of thing. Either that, or it becomes a "If there's even a question as to the morality of what is right and what is wrong, then just don't do it." And this is probably one example of the latter...as in...white people should probably (never again) try to cosplay as a Drow elf. It's just too problematic and doesn't look good. Go as Thor or something else (for that matter). There are plenty of things that wouldn't cause protests or threaten your job and still net you lots of compliments and positive attention at a comic book convention.

But it doesn't stop me from being curious about this whole Drow elf thing. :)
Posted by Michael Offutt, Phantom Reader at 7:37 AM

Email ThisBlogThis!Share to TwitterShare to FacebookShare to Pinterest
Labels: blackface, Drow elf, Dungeons & Dragons, Is cosplaying as a Drow elf considered to be wearing blackface